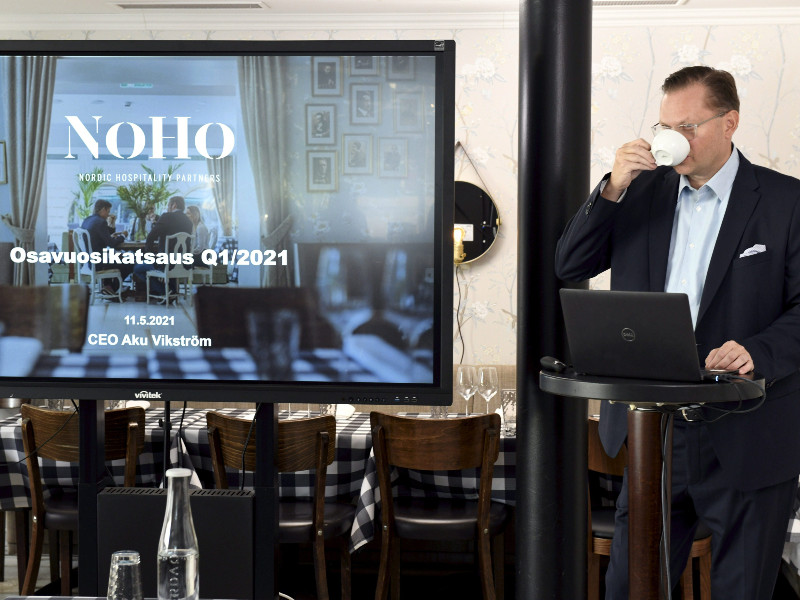 Aku Vikström, the CEO of Noho Partners, presented the restaurant group’s interim report in Helsinki in May 2021. (Heikki Saukkomaa – Lehtikuva)

NOHO PARTNERS, one of the largest restaurant groups in Finland, has announced it will temporarily lay off almost all of its personnel in the country and launch consultative negotiations to align its operations with the escalating restaurant restrictions.

The roughly two-week statutory process is set to start on 3 January.

“The negotiations will encompass the group’s entire staff in Finland, that is roughly 1,250 people. The effects of the restaurant restrictions will also be indirectly reflected in the group’s roughly 2,000 temporary agency workers,” it stated on Wednesday.

The Finnish government declared earlier this week that it will impose stricter restrictions on the restaurant industry and limit the use of the coronavirus passport, a means for businesses to circumvent any restrictions affecting their operations.

Noho Partners also said it will have to shut down most of its restaurants in the face of the restrictions on serving and opening hours. The group operates more than 200 restaurants in Finland, including the popular chains Friends & Brgrs and Hanko Sushi.

STT on Wednesday reminded that the group has resorted to large-scale temporary lay-offs during the social and economic crisis set off by the coronavirus epidemic. It terminated over 50 positions almost a year ago after a round of consultative talks launched following a year when its operating result fell some 25 million euros into the red.

Aku Vikström, the CEO of Noho Partners, saw his income increase while the group shut down restaurants. Data from the Finnish Tax Administration reveal that his taxable income rose by about 33 per cent from 375,000 to 496,000 euros in 2020.

The Finnish Hospitality Association (Mara) on Wednesday expressed its disapproval with the newly announced restrictions, arguing that the temporary shelving of the coronavirus passport violates the national strategy to manage the epidemic. The decisions overall send a chilling holiday greeting to employers and employees in the restaurant industry.

The government, it viewed, is needlessly punishing low-risk restaurants just as winter holiday resorts are preparing for their peak season. Thousands of holiday-makers, including foreigners, have already made the trip to the resorts.

“The government’s restaurant restrictions, which will come into effect quickly, unexpectedly and in the middle of the best Christmas and New Year season, dent Finland’s reputation as a travel destination,” lamented Timo Lappi, the managing director at Mara.

Mara underscored that the government must offer compensation for the revenue losses caused by the restrictions.

The restrictions, it warned, will lead to wide-scale temporary lay-offs that will only fuel the exodus from the industry. Event, restaurant and tourism industry companies have lost roughly 10,000–25,000 employees since March 2020, according to Mara.

Minister of Economic Affairs Mika Lintilä (Centre) stated to Helsingin Sanomat that the government will start devising a new cost support package for businesses affected by the restrictions.

“It’s impossible to tell the exact sum at this point, but it’ll be an estimated 120–150 million euros depending on the duration of the restrictions,” he said to the newspaper.