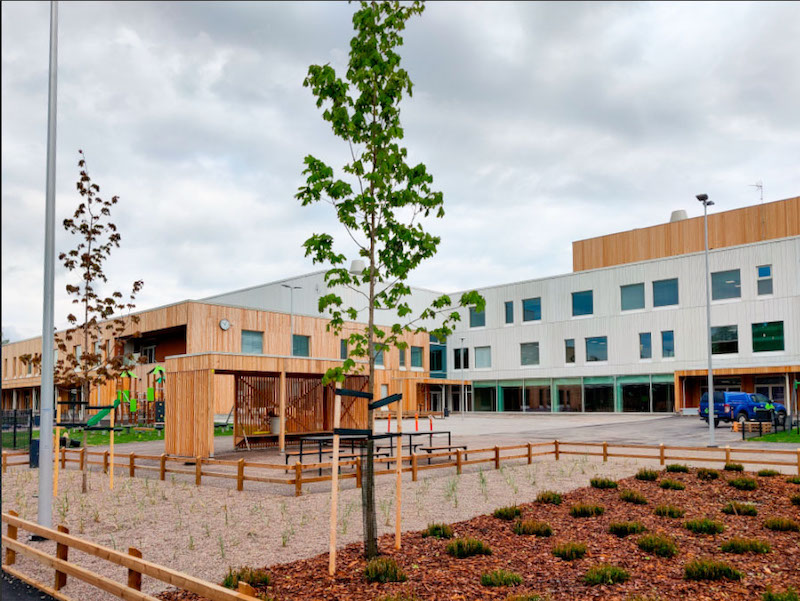 Monikko is located at Veräjäpellonkatu 4 in Leppävaara. It consists of a new building and an old part, which is a listed building. Photo: SRV

The committee justifies the choice of Monikko on the grounds that the old part, a listed building, has been successfully combined with the new building. According to the committee, the result is a comfortable combination of buildings.

Monikko consists of a new building and the old Leppävaara elementary school, which was completed in 1939 and has since been listed and renovated to form a part of the new building. The main designer of Monikko is Tomi Perko from Arkkitehtitoimisto Perko Oy. The developer is the City of Espoo Premises Department, and the main contractor was SRV Plc.

Monikko is located in a historically and scenically demanding environment close to the Leppävaara sports park and church.

The façade materials of the new building are varnished wood and 3D structural white concrete. The building has parts of different heights and the whole is human in scale also for children. The implementation is such that the listed part is not subordinate but mainly appears as an independent building.

Monikko is also a unique school project in that it is the first school in Espoo to have school and day-care facilities for both Finnish- and Swedish-speaking children. The building was commissioned in August 2021.

An honourable mention was given to residential blocks of flats at Uuno Kailaan katu 4 and 6 in Vermonniitty and to an area of single-family houses in Perusmäki.

Built up on site, the masonry façade is plastered on the street side, with brick tiles visible on the courtyard side. The site is also a good example of taking into account stormwater in the courtyard. The courtyard buildings have wood panel cladding and green roofs.

Another honourable mention was given to an area of single-family houses in Perusmäki. According to the committee, the area has successfully combined buildings designed by four different designers. The pitched roofs and eaves were also praised. The main designers are Päivi Kelhä, Lena Grönhage, Rainer Linderborg and Kimmo Lehtola. The developer and main contractor is Toivo Group Plc.

The design has taken into account the block plan, which advises the use of strong earthy colours for the buildings. The area is an example of efficient and dense construction of single-family houses.

The Hurraa award is Espoo's way of rewarding topical work relating to the built environment that has been carried out with exceptional merit and success. The award has been granted since 2014.