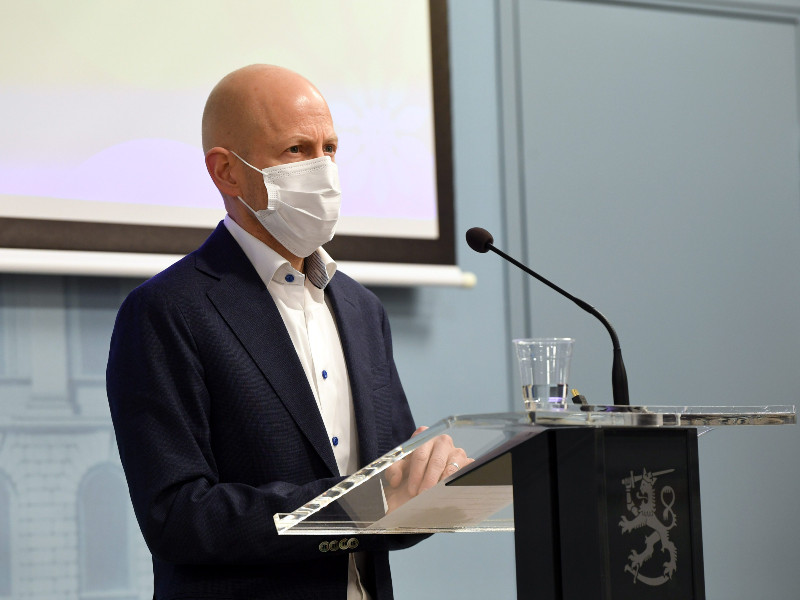 Otto Helve of the Finnish Institute for Health and Welfare (THL) briefed the media about the coronavirus situation in Finland in Helsinki on Thursday, 16 December 2021. (Antti Aimo-Koivisto – Lehtikuva)

THE OMICRON VARIANT of the new coronavirus is likely to take over as the dominant variant also in Finland, Carita Savolainen-Kopra, a leading expert at the Finnish Institute for Health and Welfare (THL), confirmed on Thursday.

“Looking at examples from other countries, it looks pretty possible and probable that omicron will rise to dominance also here,” she was quoted as saying in a press conference by Helsingin Sanomat.

While the variant has been confirmed through genomic sequencing as the cause of 34 infections, the number of suspected infections is higher. In the Hospital District of Helsinki and Uusimaa (HUS), for example, the share of positive samples believed to have been caused by omicron has risen to 26.5 per cent.

The variant is fairly obviously more transmissible than delta. With delta still the cause of most infections, the so-called reproduction number (R0) – an indication of the average number of people who contract the virus from an infectious carrier – is presently estimated at around 1.0–1.1 in Finland.

“The number has been estimated at 3–4 for omicron, meaning it’d be three times as infectious,” highlighted Savolainen-Kopra.

The number of coronavirus infections has continued to creep up in Finland. THL and the Ministry of Social Affairs and Health on Thursday reported that 10,500 infections were detected in the period between 6 and 12 December, representing an increase of 1,000 from the period between 29 November and 5 December.

The situation has deteriorated particularly in Pirkanmaa and North Ostrobothnia. Up to 10 per cent of tests have come back positive in these regions.

The increase in infections has not added to the pressure on hospital resources in recent weeks, however. The demand for intensive care has similarly not risen significantly from recent weeks, although it remains at the extremely high level of roughly 50 beds.

“This may be partly a result of people who’ve been vaccinated twice getting tested more eagerly,” viewed Otto Helve, a chief physician at THL.

Helve also reported that the third round of vaccinations has progressed well, with around 565,000 doses already administered – including to over 75 per cent of people who received their second dose more than six months ago.

“The pace is very brisk,” he said.

Mia Kontio of THL stressed that the third doses are important especially for population groups such as over 60-year-old people and people at heightened risk of the disease due to medical conditions.

“There are no indications that the threat of a serious disease has risen for healthy, under 60-year-old people,” she said.