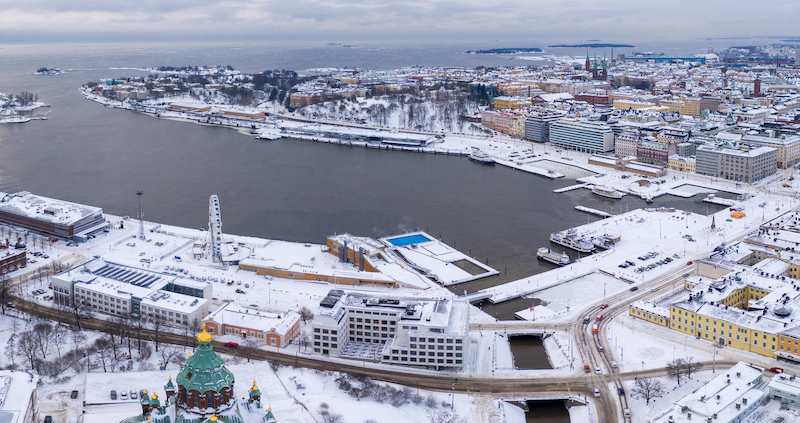 The competition entries of the international quality and concept competition for the Makasiiniranta area at the South Harbour are now available for viewing and comments on the Voice your opinion online service from 16 December 2021 to 16 January 2022.

Citizens and those interested in the development of the area are asked to give their views on how the entries would improve Makasiiniranta as a place of maritime recreation for all.

Nine international competition groups have drawn up overall designs, in which the city centre and its services are extended to Makasiiniranta. In accordance with the goals of the competition, the Makasiiniranta area will be part of the pedestrian city centre and the seaside trail around the shores of Helsinki, and a location for the new Architecture and Design Museum.

In the Makasiiniranta competition, nine competition entries for the first phase have been submitted under pseudonyms and they are publicly available for viewing and comments by all interested people in the Voice your opinion service. Each competition entry includes a presentation in both Finnish and English. The appendices are available in English.

"Our goal is a memorable and maritime Makasiiniranta, where culture and leisure time are omnipresent, attracting people from near and far. Events, services and the inviting trail in the maritime landscape contribute to the extension of the city centre to the South Harbour, while also improving the vitality of the area's businesses," says Juhana Vartiainen, Mayor of Helsinki.

Comments and views on the competition entries can be submitted until 16 January 2022. A feedback summary will be made available to the jury for information and use in judging.

Top four will advance to the second phase

"The level of the competition groups is high even on an international scale. Expectations are equally high – this is a showcase for any operator in the field, and the consortia have certainly done their absolute best in the competition entries. This is not just about creating the maritime façade for Helsinki, but about creating an iconic place and landscape that are meaningful to Finns," says Ville Lehmuskoski, Executive Director of the City of Helsinki Urban Environment Division.

In the first phase of the competition, the jury will focus in particular on the overall solution of the design and how the design idea fits to the landscape of the South Harbour and its values. In the evaluation, attention will also be paid to the cityscape-related quality of the designs, the functionality and feasibility of the concept, the quality of the pedestrian environment and urban space, and solutions that will promote the implementation of the Carbon-neutral Helsinki 2035 action plan. Another important thing to consider is the observance of the new Architecture and Design Museum, the Old Market Hall and the harbour building as components of the whole. The competition does not include designing the new Architecture and Design Museum. A separate architecture competition will be organised later for the museum.

The selected competitors will compile more detailed entries by the end of June 2022. Also in the second phase, the competition entries will be put on public display and made available for public commenting via the Voice your opinion service. The progress of the competition can be followed at makasiiniranta.hel.fi.

Makasiiniranta competition winner to be announced in autumn 2022

The two-phase Makasiiniranta quality and concept competition launched in May 2021 is intended for both Finnish and international operators, or consortia of operators, in the construction and real estate industry who have the technical, financial and other prerequisites to design and realise a particularly challenging and high-quality construction project along the western shore of Helsinki's South Harbour bay.

Nine groups have been admitted to the competition. Some of Finland's largest and most international architects' offices are involved as well as a few well-known international offices.

The competition groups are: