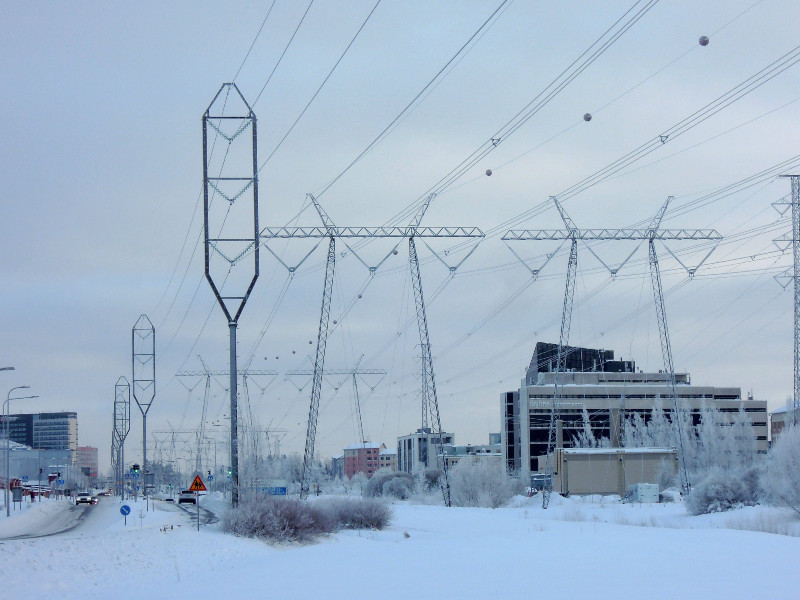 Power lines in Vantaa on 17 January 2021. Low temperatures have driven up demand for electricity in Finland. (Ritva Siltalahti – Lehtikuva)

Data from Nord Pool, an electricity exchange co-owned by transmission system operators in the Baltics and Nordics, indicates that the market price of electricity will surge to about 1,000 euros per megawatt-hour at 7–8am on Tuesday.

The average price is 469 euros per megawatt-hour in Finland, significantly higher than in many other parts of Europe.

Helsingin Sanomat on Monday wrote that the price is being driven up not only by the low temperatures but also by the shortage of wind and hydropower. The surge, it added, will have an impact on households with an electricity contract based on hourly spot prices on the electricity exchange.

In Finland, the price of electricity spiked roughly 10 years ago at as high as 1,400 euros per megawatt-hour, prompting the country to resort to its electricity reserve amid a spell of very cold weather.

Helen, the energy utility of the City of Helsinki, reported at the end of last month that the consumer prices of district heat will rise by an average of 15 per cent year-on-year between January and September 2022.

The surge is indirectly attributable to an increase in excise duties that has coincided with exceptionally marked rises in fuel, electricity and emission right prices.

“Some of this will unfortunately be evident as a rise in consumer prices. Natural gas is a very critical fuel for us, and its price has risen by 530 per cent since last winter season,” Anu-Elina Hintsa, the head of sales and customer service at Helen, commented to Helsingin Sanomat.

“Less raw materials are used in the summer and the demand is lower, which is why the prices will decline heading toward the summer. We’re also expecting that the political challenges that have caused gas prices to creep up will be resolved. A large share of the natural gas comes from the east,” she added.