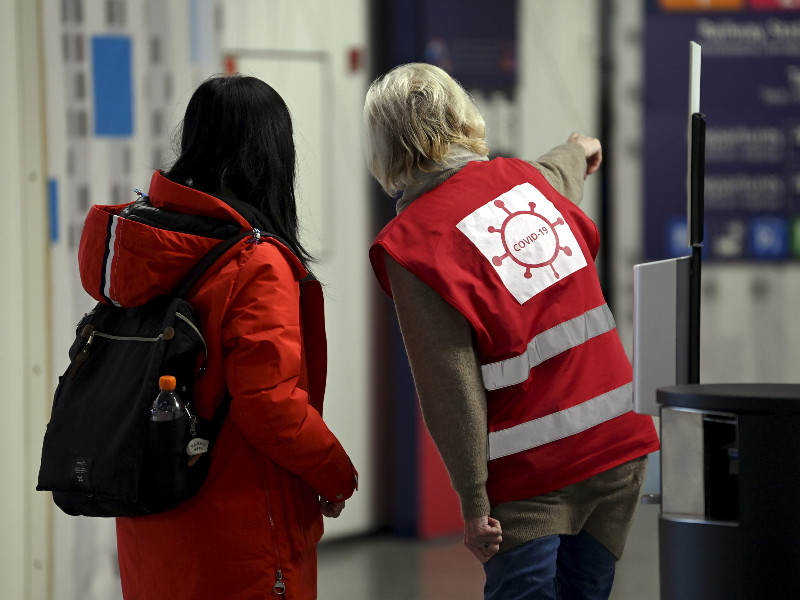 An employee provided instructions to a passenger at Helsinki Airport on 27 November 2021. (Emmi Korhonen – Lehtikuva)

THE FINNISH GOVERNMENT on Sunday decided to prohibit entry for passengers who in the past 14 days have spent time in Botswana, Eswatini, Lesotho, Mozambique, Namibia, South Africa or Zimbabwe.

The entry ban was imposed due to concerns about omicron, a coronavirus variant discovered in South Africa in November. It entered into effect at 3pm on Sunday.

Such people will not be allowed to enter the country for other than non-essential reasons, such as family or personal reasons, even if they present a certificate of full vaccination against the coronavirus. The entry ban does not allow to citizens or permanent residents of Finland, as the constitution stipulates that citizens must not be prevented from entering the country.

The World Health Organisation (WHO) last week labelled omicron as a variant of concern, saying some of the large number of mutations in the variant are concerning. “Preliminary evidence suggests an increased risk of reinfection with this variant, as compared to other [variants of concern],” it stated.

In Europe, infections caused by the variant have been detected in Belgium, Czech Republic, Denmark, Germany, Italy, the Netherlands and the UK. The European Commission has advised member states to suspend travel from southern parts of Africa.

Officials at the Finnish Institute for Health and Welfare (THL) have reminded that it remains premature to state definitively how the variant could impact vaccine efficacy and how transmissible it is compared to earlier variants.

“A combination of several mutations have been detected in it, some of which have been seen before and some of which are new. We can’t know what their impact will be until additional studies have been carried out,” Mika Salminen, the director of health security at THL, stated to MTV on Saturday.

“It won’t happen overnight or in a couple of weeks, but it’ll likely take months.”

Reuters on Sunday wrote that a South African doctor has said patients infected by the variant have experienced “very mild” symptoms.

The Ministry of the Interior on Sunday said the Finnish Border Guard is monitoring inbound passenger traffic and brief health care authorities of any developments. As there are no direct flights from southern parts of Africa to Finland, most passengers connect to a flight to Finland in Frankfurt or Munich, according to Helsingin Sanomat.

The Ministry of Social Affairs and Health viewed in a press release that the variant can pose a serious threat to public health and well-being and deteriorate the epidemiological situation in Finland. It has instructed municipalities about the necessary measures at border-crossing points such as ports and airports in co-operation with Regional State Administrative Agencies (AVI).

Measures at Helsinki Airport and other border-crossing points were ramped up on Saturday. A health inspection including a coronavirus test is mandatory for all over six-year-old passengers, regardless of whether they have symptoms or have been vaccinated, arriving from southern parts of Africa.

THL has also recommended that anyone who entered the country from the region in the past two weeks get tested and avoid contact with others until the test has come back negative. Their close contacts, in turn, are encouraged to get tested at the onset of even the mildest of symptoms.