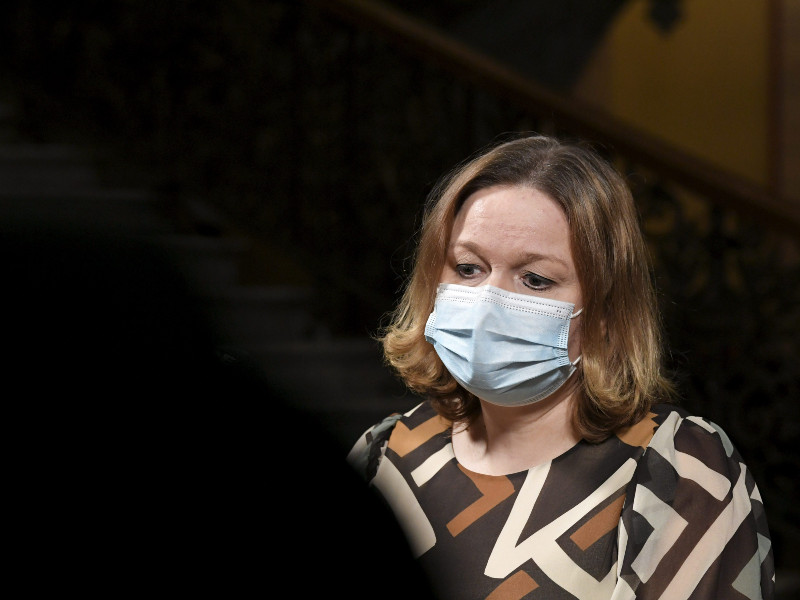 Minister of Family Affairs and Social Services Krista Kiuru (SDP) spoke to reporters in the House of the Estates in Helsinki on 10 November 2021. (Markku Ulander – Lehtikuva)

MINISTER of Family Affairs and Social Services Krista Kiuru (SDP) on Wednesday revealed new restrictions are being drafted in response to the deteriorating epidemiological situation in Finland.

The intention, she said, is to target the restrictions at unvaccinated people by expanding the use of the coronavirus passport, a certificate that is available to anyone who has been fully vaccinated against, recovered from or tested negative for the coronavirus disease.

The Ministry of Social Affairs and Health and Finnish Institute for Health and Welfare (THL) will submit a proposal for the new restrictions to the Ministerial Committee on Social Affairs on Thursday, according to YLE.

Kiuru emphasised that the epidemiological situation must be brought under control in order not to have to resort to the so-called emergency brake.

“Our proposal tomorrow will be to toughen restaurant restrictions. This would lead to the new restrictions coming into effect already for next weekend, should the political will to do so exist,” she stated to the public broadcasting company.

THL on Wednesday reported that a total of 306 people are presently in hospital care, including 42 in intensive care, with a coronavirus infection.

“It’s wrong and unfair that the vaccinated have to suffer because the number of intensive care beds [in use] is rising constantly, which – with the burden being too great – is leading to people not getting access to other social and health care services,” said Kiuru.

Prime Minister Sanna Marin (SDP) stated yesterday that the government will convene to discuss the situation at the beginning of next week.

Pressure on the government to decide on measures such as expanding the use of the coronavirus passport, stepping up restrictions on restaurants, vaccinating under 12-year-olds and limiting entry to the country has mounted with the epidemiological situation deteriorating in recent weeks and months.

“The coronavirus situation is very alarming,” Marin told YLE. “It’s more and more important that all people go and take the vaccines they’re being offered.”

Helsingin Sanomat on Wednesday wrote that the government has failed to find an agreement on whether people arriving in the country should be obligated to take two coronavirus tests. While the Centre Party has questioned the need for the second test, most cabinet members believe the second test is necessary.

Kiuru viewed that it would be “crazy” not to require two tests from people who have not received a full series of an approved vaccine.

“I’ll say that this would be completely impossible and crazy. In this epidemiological situation, we can’t take the approach that the roughly 110,000 foreign workers, most of whom will likely head home for Christmas, return to a world where the second test is no longer a statutory requirement,” she stated.