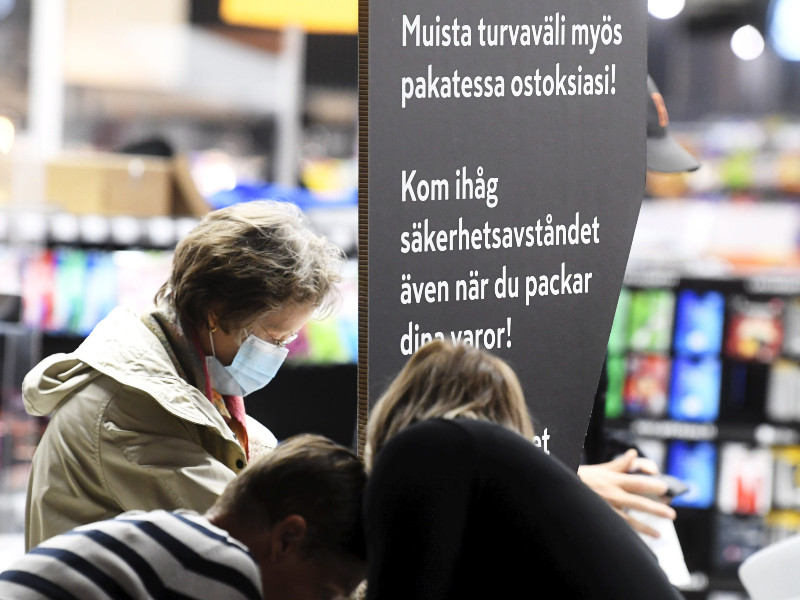 A person wearing a face mask standing next to a sign reminding customers of the need to maintain a safe distance to others at the register of a shop in the Mall of Tripla in Helsinki on 25 September 2020. (Vesa Moilanen – Lehtikuva)

A FACE-MASK RECOMMENDATION has been reinstated for all 12-year-olds and older, regardless of their vaccination status, in the capital region of Finland.

The working group coordinating the regional response to the coronavirus epidemic decided yesterday to recommend that face masks be worn in all public indoor spaces and on public transport where other people are present.

The use of masks is recommended also in education starting with pupils in the sixth year of primary education.

The recommendation entered into force immediately.

The working group also decided to reinstate a broad-based remote-work recommendation, eliciting an immediate response from some of the largest employers in the region. Elisa, for example, announced it intends to recommend remote work for its employees in both the capital region and Southwest Finland.

Employees who are unable to work remotely should be encouraged by their employers to wear face masks when performing their duties regardless of whether they are able to avoid close contact with other people.

“At workplaces, lunch and coffee breaks should be staggered and the need for personal meetings should be carefully assessed,” its press release reads.

The recommendations were issued on grounds of the aggravating epidemiological situation in Greater Helsinki.

“The situation has changed during the early parts of autumn,” said Mayor of Helsinki Juhana Vartiainen (NCP). “High infection figures among the unvaccinated have increased infections also among the vaccinated. No return to normalcy is on the horizon.”

Jari Petäjä, the acting chief medical officer at the Hospital District of Helsinki and Uusimaa (HUS), said the hospital district is currently detecting almost as many infections as during the spike in infections witnessed last spring.

“People who have received two vaccine shots aren’t fully safe from the coronavirus, and also some of them have ended up as inpatients in hospitals,” he said. “Every day we have to cancel four to five surgeries that require intensive care. The intensive care unit presently has 18 patients admitted there because of the coronavirus.”

The working group additionally called on the government to adopt tougher restrictions on restaurants and bring forward the third round of vaccinations. All restaurants in the capital region, it added, should demand the coronavirus certificate from all customers at all times of day.

“Rising infection rates and the strain on hospital care require urgent action from both regional operators and the government. Managing the epidemic is a shared responsibility,” the release reads.

Similar recommendations were announced yesterday also by the Hospital District of Southwest Finland. People regardless of their vaccination status, the district said, should wear a face mask both indoors and outdoors whenever it is impossible to maintain a safe distance to others.