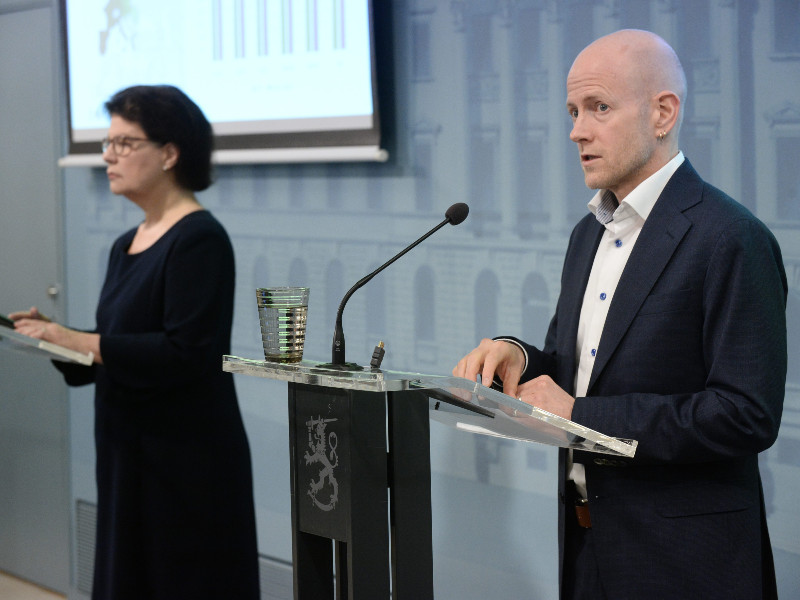 Liisa-Maria Voipio-Pulkki of the Ministry of Social Affairs and Health and Otto Helve of the Finnish Institute for Health and Welfare (THL) provided an update of the coronavirus epidemic in Finland in Helsinki on Thursday, 11 November 2021. (Mikko Stig – Lehtikuva)

THE LENGTHY CAMPAIGN to vaccinate 80 per cent of 12-year-olds and older against the new coronavirus was completed in Finland on Wednesday.

The epidemiological situation, however, has continued to exacerbate. Officials at the Finnish Institute for Health and Welfare (THL) and Ministry of Social Affairs and Health revealed yesterday that 5,134 infections were detected during the latest full week, signalling a jump of over 1,000 from the previous week.

The real number is believed to be higher than reported.

No single measure, they indicated, will suffice to end the epidemic and reduce the burden on hospital resources. It is thereby necessary to continue to avoid crowds, use face masks and stay at home with any symptoms, for example.

“The overall picture is pretty clear unfortunately. The epidemiological situation took a turn for the worse this week on a number of indicators,” Liisa-Maria Voipio-Pulkki, a senior specialist at the Ministry of Social Affairs and Health, was quoted as saying by Helsingin Sanomat.

It is a positive sign that the number of tests has increased, as it suggests people are getting tested at the onset of symptoms.

Finland is presently home to roughly 681,000 unvaccinated people aged 12 years or older and such people make up the majority of patients hospitalised with a coronavirus infection. Voipio-Pulkki argued that it is obvious that vaccines protect people against the disease and alleviate the epidemiological situation.

“You have to note at the national level that no decline is expected in the demand for hospital care. The burden varies on a week-to-week basis,” she said.

The demand for special health care, though, will increase, she estimated.

What could be a realistic estimate of the maximum number of vaccinated people and how would achieving it affect the situation?

“The answer is that we don’t know,” conceded Otto Helve, a chief physician at THL. “We have terribly few experiences of mass vaccinations targeted at the adult population both nationally and internationally. The levels achieved in different countries can’t be compared with each other.”

“But we’re naturally aiming for as high a coverage as possible.”

Officials in Finland remain confident in the effectiveness of the coronavirus pass, and the government has declared its readiness to expand the scope of application – despite lack of firm evidence. Helve told that many countries have found the pass to be a tool that is easy to use in the effort to alleviate the epidemic.

“That’s why it’s difficult to evaluate measures in a vacuum – like how the pass has affected the epidemiological situation here. The pass is being used widely internationally.”