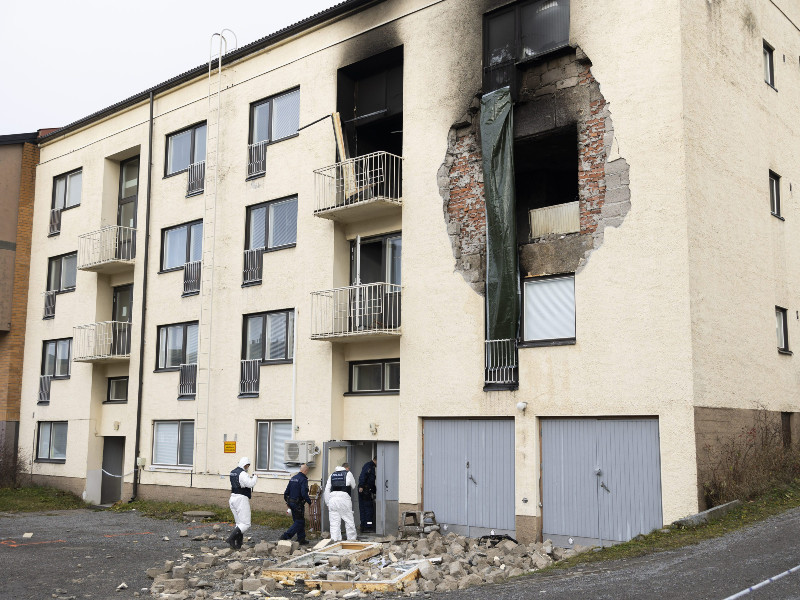 Forensic investigators examining the scene of an explosion in Varkaus, Eastern Finland, on Monday, 1 November. The explosion left one person dead and the entire block of flats uninhabitable. (Matias Honkamaa – Lehtikuva)

POLICE have determined the likely cause of a fatal explosion that took place in a flat in Varkaus, Eastern Finland, on Sunday.

Eastern Finland Police Department on Tuesday revealed that investigations conducted at the crime scene indicate that vaporised gasoline was likely the cause of the explosion and subsequent fire. It remains unknown whether the person found dead in the flat had ignited the gasoline on purpose or by accident.

The lone casualty has tentatively been identified as a man born in his early 30s who had recently moved to Varkaus. The man is not a “so-called old acquaintance of police”, a police spokesperson said in the press release.

The man was alone in the flat at the time of the explosion. Four other people were rescued from the same building following the explosion, three with the help of an aerial platform and one with the help of an escape hood. The four residents were taken to hospital care due to exposure to smoke, but none of them had sustained more serious injuries requiring longer-term care.

Altogether roughly a dozen people were in the building at the time of the explosion, but most of them managed to leave the building without assistance.

The explosion destroyed the flat it occurred it completely, causing the balcony and wall to collapse. The entire building has been declared uninhabitable for the time being, but local authorities have arranged temporary accommodation for the residents.

The incident is being investigated as aggravated criminal mischief and as a death and fire investigation. The investigators have yet to rule out any possibilities, Vesa Koponen, a detective chief inspector at Eastern Finland Police Department, said on Tuesday, according to Helsingin Sanomat.