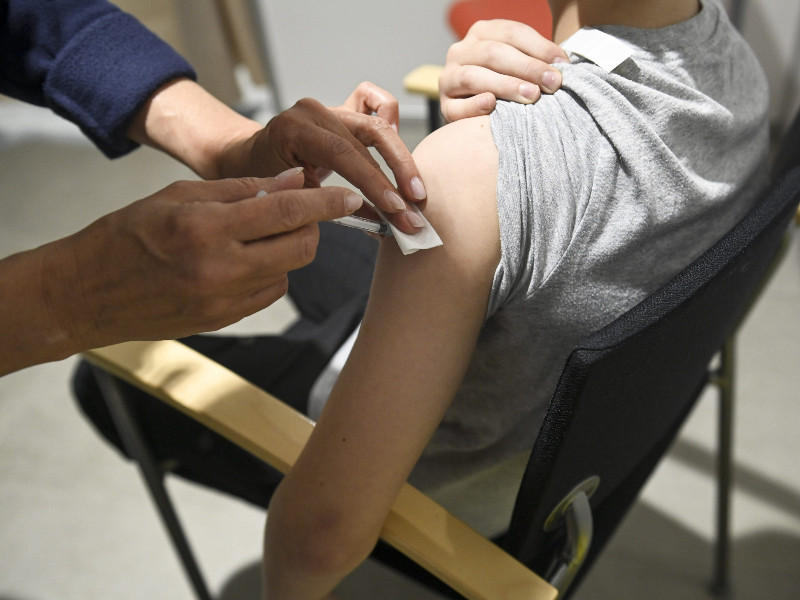 A 12-year-old boy received his first dose of the Pfizer-Biontech vaccine in Espoo on 24 September 2021. (Emmi Korhonen – Lehtikuva)

DESPITE signs of the overall epidemiological situation improving, the coronavirus is continuing to spread at an alarming rate among the unvaccinated in Finland, according to the Finnish Institute for Health and Welfare (THL) and Ministry of Social Affairs and Health.

“Seven-hundred is truly a staggering number,” Mia Kontio, a senior expert at THL, was quoted as saying by Helsingin Sanomat. “The unvaccinated are also those who’ll get sick. The people in hospital care are also mostly unvaccinated.”

Unvaccinated 12–79-year-olds were admitted to hospital care with a coronavirus infection 19 times more often than their fully vaccinated peers in the last two weeks.

Asko Järvinen, the chief physician of infectious diseases at the Hospital District of Helsinki and Uusimaa (HUS), told YLE on Thursday that the risk of an unvaccinated person contracting the virus is today probably higher than ever before.

It is likely that some of the infections in vaccinated people are undetected as fully vaccinated people are no longer required to get tested for the virus for mild symptoms. The decline in testing, however, alone does not account for the significant divide between the vaccinated and unvaccinated, stressed Pasi Pohjola, a director at the Ministry of Social Affairs and Health.

“Vaccines provide a fairly good protection also against contracting the virus, which is why infections aren’t as common among the vaccinated. It therefore doesn’t explain the difference completely. The difference is significant,” he said.

Officials at THL and the Ministry of Social Affairs and Health underlined in the joint press conference that vaccinations remain the primary tool for containing the epidemic. With over three-quarters (76%) of the population have already receiving both vaccine doses, the vaccine uptake target of 80 per cent should be reached during the first week of November, according to THL.

The experts revealed that a medical condition is rarely an obstacle to getting vaccinated, meaning most of unvaccinated people have opted out for other reasons.

Roughly a fifth of unvaccinated people are foreign-language speakers, according to the press conference. THL has conducted a survey into the issue, finding that the reasons for not getting vaccinate may include lack of trust in authorities and difficulty of finding reliable information about vaccines in a particular language.

This has also been reflected intermittently in hospitalisations, according to Pohjola.

“There was talk already in the spring that the share is a bit higher. The situation has changed a lot and there has also been regional variation. There are circumstances where the share of foreign-language speakers can be high,” he said.

“The typical load on intensive care, however, has been a Finnish-speaking man with a bit of a mid-section.”