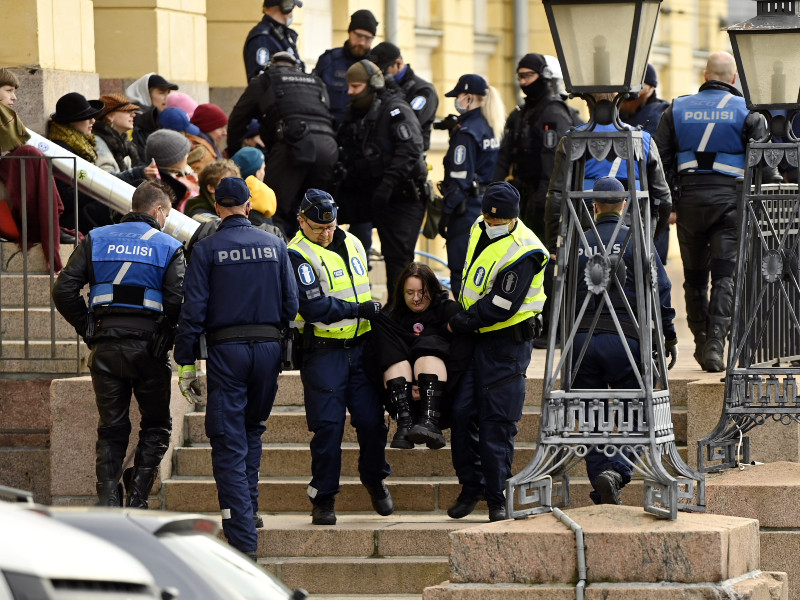 Police officers removed demonstrators from the steps of the Government Palace in Helsinki on Friday, 8 October 2021. (Antti Aimo-Koivisto – Lehtikuva)

THE NATIONAL POLICE BOARD has revealed it intends to look into police actions in response to a demonstration organised at the Government Palace in Helsinki on Friday by Extinction Rebellion Finland.

The actions of police officers breaking up the demonstration have provoked widespread debate and criticism.

The National Police Board on Monday stated that it has followed the debate and decided to look into the case as an own-initiative judicial review matter. Police officers dispersed the demonstration in the afternoon, arguing that the demonstrators were causing a security threat in an attempt to influence the ongoing government meeting. The organisers also had not submitted advance notification of the demonstration.

Many lawmakers participating in the meeting, however, estimated later that the situation much calmer than reported by police.

Helsinki Police Department on Sunday conceded that it had misjudged the security threat presented by the demonstration. The situation inside the building was calm and there was no concrete threat contrary to what was implied in police communication on Saturday, said Heikki Kopperoinen, a deputy chief of police in the Finnish capital.

“There were different subjective views […], and the assessment wasn’t the same in all respects,” he commented to STT.

Fifty-two demonstrators were brought into custody by police in conjunction with the operation, but four of them were released immediately for being under 18 years of age. The demonstrators are tentatively suspected of aggravated invasion of public premises, contumacy to the police and prevention of a public meeting.

The first offence, in particular, has caught the attention of public commentators.

Kimmo Nuotio, a professor of criminal law at the University of Helsinki, told Helsingin Sanomat that some cases of invasion of public premises are brought into the judicial system annually, but the aggravated form of the offence is less common, occurring less than once a year.