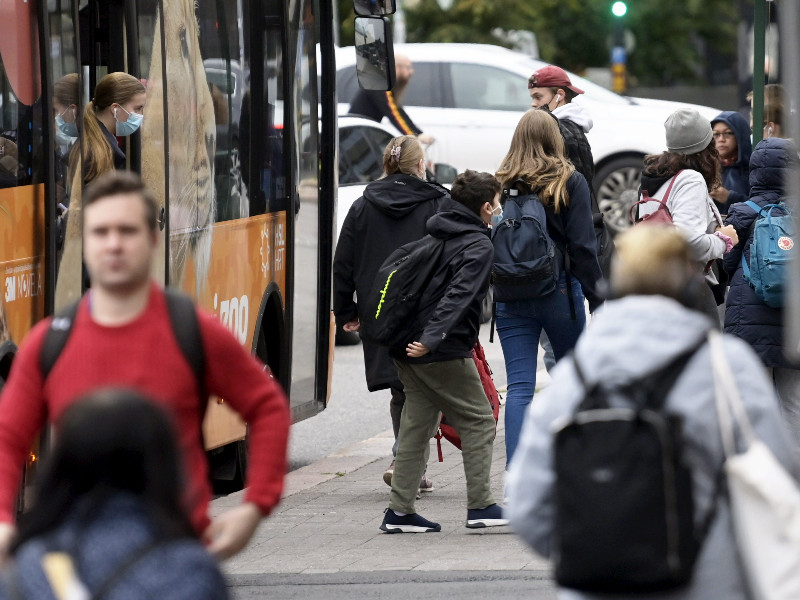 Commuters at Railway Square in Helsinki on 16 September 2021. The spending spree enabled by the vaccination campaign and lifting of restrictions on business activity is expected to be among the main drivers of economic growth in Finland. (Vesa Moilanen – Lehtikuva)

THE FINNISH ECONOMY is recovering swiftly from the abrupt downturn set off last year by the coronavirus pandemic.

The Ministry of Finance on Monday joined a growing group of forecasters that are increasingly optimistic about the short-term outlook, predicting that the economy will expand by 3.3 per cent in 2021 and 2.9 per cent in 2022.

The growth spurt stems from the release of bottled-up demand enabled by the progress made with vaccinations, the tearing down of restrictions on business activity, and booming confidence in the economy among businesses and consumers.

“Private consumption, exports and investments will speed up economic growth this year. The global economic situation will worsen next year, and household savings may not suffice to speed up economic growth as much as this year. It is therefore very likely that the growth spurt is temporary for the Finnish economy,” commented Mikko Spolander, the head of the economics department at the Ministry of Finance.

The Finnish economy contracted by 2.9 per cent in 2020, according to Statistics Finland. Forecasts for the growth rate for this year hover around 3.5 per cent and those for next year between three and four per cent.

The Ministry of Finance estimated that the employment rate will creep up to 74 per cent in 2023, one percentage point short of the objective set by the government of Prime Minister Sanna Marin (SDP).

The rapid economic growth has, unsurprisingly, kindled concerns about the supply of skilled labour in Finland. Spolaner on Monday stated that it remains premature to tell whether the shortage reported by businesses and interest groups is a temporary or a longer-term phenomenon.

“Long-term unemployment has not decreased, even though there are reasonably many open jobs in Finland. I believe this is indicative of an ongoing structural change in the economy. There is demand for expertise required in emerging sectors, but the workforce released by regressing sectors is not in high demand because some of them do not have the expertise employers need,” he told.

Although the divide between public expenses and revenues is set to narrow notably this year as the rapid economic and employment growth boost tax revenues and reduce spending on unemployment services, the temporary improvement will not solve the structural problems and the public economy will show a deficit of nearly three billion euros once the economy settles onto its usual path.

Public debt as a proportion of gross domestic product will consequently rise to 72 per cent by 2023, having stood at 59.5 per cent before the pandemic and 69.5 per cent in 2020.

Population ageing and sluggish productivity growth are the key weaknesses of the economy also according to the Ministry of Finance. Spolander said it is critical to support employment, investments, labour productivity, cost competitiveness and stable public finances in the longer term by means of structural policy tools.