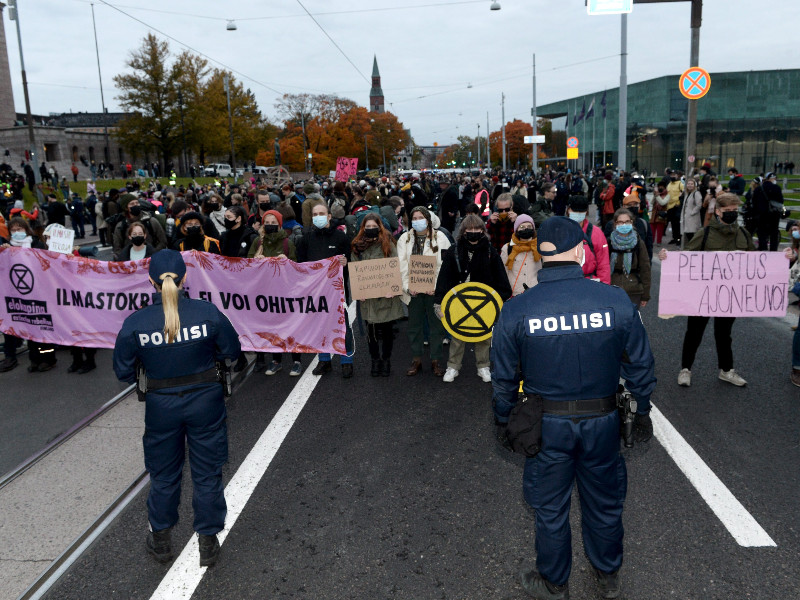 A 10-DAY DEMONSTRATION kicked off in Helsinki on Wednesday by Extinction Rebellion Finland was broken up by police only an hour after its start.

Estimates suggest that several hundreds of people gathered for the demonstration on Mannerheimintie outside the Parliament House at 6pm on Wednesday. Officers at Helsinki Police Department, though, ruled the demonstration as unlawful on grounds of the significant and long-term traffic disruption it would have caused and began taking the participants into custody at 7pm.

The latest press release indicates that 141 people were taken into custody.

Extinction Rebellion Finland tweeted at around 10.30pm that the demonstration will continue outside the Parliament House. A couple of dozen demonstrators remained at the site an hour earlier, according to Jarmo Heinonen, a chief inspector at Helsinki Police Department.

“The thinking is that no demonstration will stay here and people will slowly start leaving in whichever direction they want,” he said to Helsingin Sanomat.

The objective of the demonstration was to compel the government to declare a climate emergency and take appropriate action without delay. Lauri Autere, the head of media and public relations at Extinction Rebellion Finland, stated to STT that the intention is to resume the demonstration as soon as possible.

“We’re weighing up our options, but the idea is that we’ll definitely return to the site,” he said.

Police will respond as necessary, retorted Heinonen. “It’ll be treated as a different day, different situation.”