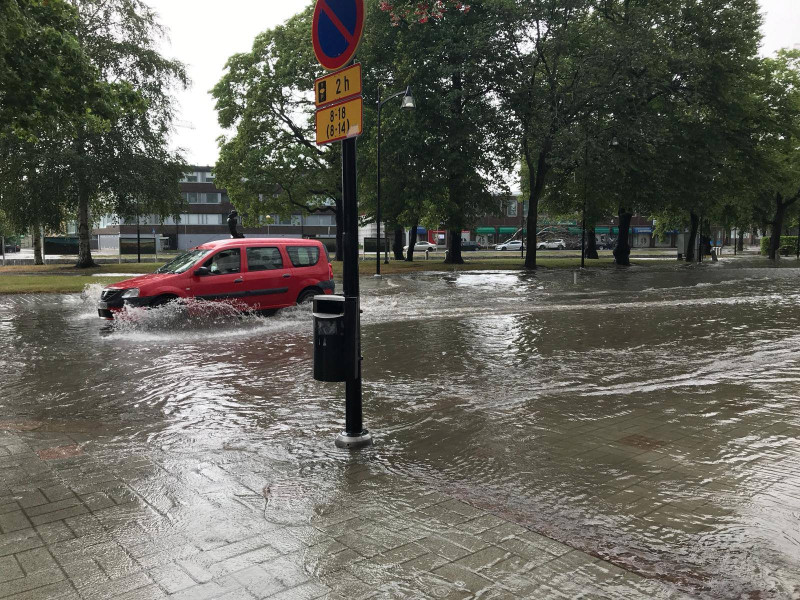 HEAVY RAINS and floods, rather than droughts, heatwaves and storms, are the most serious consequences of the climate emergency in Finland, according to a report published last week by the Finnish Climate Change Panel.

The report by the independent interdisciplinary think tank is the first attempt to present an overview of the national efforts to adapt to and the regional consequences of the change.

Low-pressure systems of the future, the report warns, will contain more moisture and increase rainfall especially between October and February.

“We can tell from the scenarios that the rains pose great risks. The analyses show more reliably that it will be rainy. For example, windiness isn’t a risk that’s increasing as much,” Hilppa Gregow, the research professor in charge of climate change impact research at the Finnish Meteorological Institute (FMI), stated to YLE on Thursday.

The Finnish climate will change inevitably in the coming decades, even if emissions are successfully reduced in Finland. The country should therefore concentrate not only on emissions cuts and other climate actions, but also prepare for the ramifications of the climate emergency – and waste no time in doing so, according to the Finnish Climate Change Panel.

The need to adapt to the change is urgent especially if the climate are insufficient.

The risk of flooding is the highest in Pori and Rovaniemi. Floods and heavy rains, though, will create problems also in areas along the southern coast, along River Kymijoki in Kymenlaakso, and along coastal areas between Kotka and Hamina.

The drinking water and heating systems of residents are at risk in these areas, according to Gregow.

“Flood risks are already significant in these localities, and they’ll only continue increasing. In Pori, the issue of flood risk should be examined in a completely new way. Similarly in Lapland all urban areas should be reviewed thoroughly,” she said to the public broadcaster.

“The focus has been far too much on looking at whether the weather will warm and by how much,” she added. “We should pay a lot more attention to how much it rains, where the rains occur and what effects they have.”

Because of the typical paths of low-pressure systems, rains are forecast to increase especially in southern and northern parts of Finland. The risk of flooding will increase in the north as a result of high volumes of snow melting in the spring and in the south as a result of warmer, rainy winters.

“Our soil isn’t used to getting rain around the year. We haven’t really had it previously,” said Gregow.

High rainfall and paved urban environments are another troubling combination, as cities that cannot absorb rain will be incapable of withstanding severe weather events of the future. Paris, for example, has recognised the issue and begun replacing concrete pavements with forest areas in a bid to adapt to both heavy rains and severe heatwaves.

“If we continue to build this way, meaning only with asphalt, cities will face major problems also in Finland,” warned Gregow.

The expected annual value of flooding-related accidents is roughly four million euros in Helsinki and Espoo. Without measures to adapt to the growing risks, the annual damage will increase by 16–120 per cent by 2050.

A number of countries are dragging their feet on preparing for the effects of the climate emergency. Finland is no exception, with its focus on strategic steering and coordination and broad-brush plans.

“Adapting and recognising risks regionally is in its infancy. Not a single reason has carried out systematic risk assessments,” Sirkku Juhola, a professor at the University of Helsinki, commented to YLE.

Juhola underlined that possible future scenarios should be taken into account in all major infrastructure projects if the intent is to ensure the building is still standing and the road is in use at the end of the century.

“I’d call for exhaustive risk assessments that steer the targeting of adaptation measures,” she said, adding that also citizens should also weigh up the need for a contingency plan.

“Adapting is the responsibility of whoever owns the asset. If you own real estate or forests that are vulnerable to many direct impacts, you should check what’s your current insurance policy. It’s worth considering in preparation of sudden flood risks what you should do actually if water stars pouring in through the door.”

“What we do to avoid massive devastation and economic damage and other harm to people is a significant social question,” echoed Gregow.