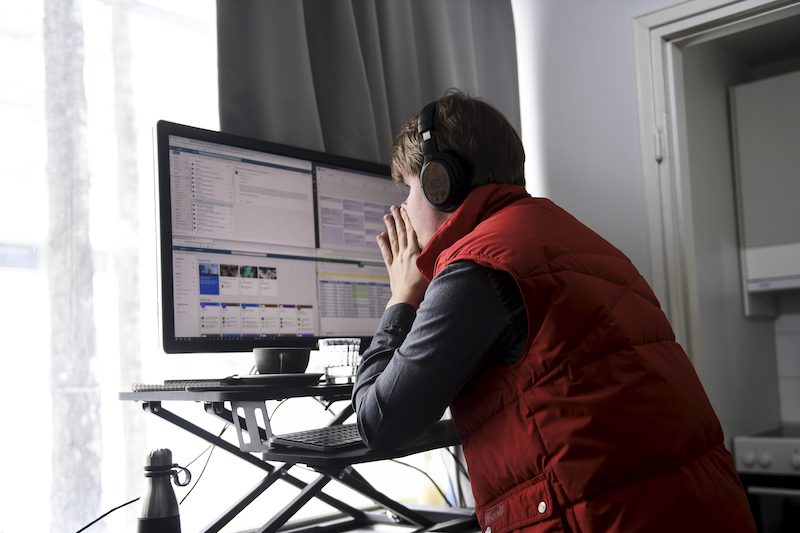 The three studies are part of the implementation of the Roadmap for Fossil-Free Transport, the aim of which is to help achieve the Finnish government’s pledge to halve greenhouse gas emissions from domestic transport by 2030. The studies were completed under the co-ordination of the Ministry of Transport and Communications.

Published in May 2021, the Roadmap for Fossil-Free Transport includes an estimates that, in addition to the measures decided on earlier, the aim is also to aim at a reduction in emissions of 1.65 megatonnes by 2030. The Roadmap sets out the measures to be taken to achieve this goal. The first phase of the Roadmap includes various subsidies and incentives, whilst the second phase includes teleworking and transport services, the potential of which has now been assessed in the three studies.

1. The impact of telework on emissions is moderate

In 2019, there were about 357,000 teleworkers in Finland. During the coronavirus pandemic in 2020, the number of teleworkers rose to approximately 790,000. This number is estimated to be the maximum achievable figure with the current regional and employment structures. According to the study, teleworking is becoming more common independent of the encouragement from the central or local government.

The Government study was co-ordinated by Ramboll Finland. The project steering group included experts from the Ministry of Transport and Communications and the Ministry of the Environment.

According to the study, the emission reduction potential of transport services in 2030 will be relatively small, approximately 0.080 megatonnes. For the purposes of this study, transport services were defined as services for sharing and renting cars and other vehicles, as well as taxis and public transport. Further in the future, the emission reduction could be significantly higher by 2045, up to as much as 0.580 megatonnes.

The main explanation for the reduction in emissions is the reduction in car ownership. In the long run, autonomous transport and the widespread use of demand-responsive transport will also reduce emissions. If the proportion of e-vehicles used in transport services grows faster than car ownership, the greater use of transport services could reduce greenhouse gas emissions from transport even more than the above estimates suggest. However, emission reductions from the electrification of the car stock have been taken into account as a whole in the calculations used for the Roadmap for Fossil-Free Transport.

3. The shift from road to combined transport would require a new kind of thinking and investments in transport terminals

According to the study, combined transport could reduce CO2 emissions from transport by an estimated 0.018-0.030 megatonnes by 2030. The report focuses on transport in which a combination of vehicles with tractor units, a semi-trailer without a tractor unit or a container is transported in a train carriage from one transport terminal to another. The estimate is based on statistics at on six routes: Helsinki–Oulu, Helsinki–Kuopio, Turku–Oulu, Turku–Kuopio, Tampere–Oulu and Tampere–Kuopio. The Helsinki–Oulu route offers the greatest potential for reducing emissions.

The transition to combined transport requires investment in the rail network, terminals and, in domestic traffic, new rolling stock. For example, the Helsinki Metropolitan Area does not currently have a terminal suitable for combined transport. In addition, there would be a need for an operator that could provide the service in a commercially sustainable manner. In addition to existing tax relief, combined transport could be supported by environmental tax incentives.

There have been no combined rail-truck transports in Finland since 2014, as it has not been profitable. By contrast, the volume of combined transport in Sweden, Germany and Estonia, for example, is on the rise.

Once the progress of the EU-level measures on transport and the first and second phases of the Roadmap for Fossil-Free Transport has been established by autumn 2021 at the latest, the Government will assess and decide on the possible need for further national action on transport. For this purpose, the Government will continue to prepare various policy options in case other national measures and EU-level solutions together prove insufficient.

A report on a possible increase in the distribution obligation for renewable fuels will be published in autumn 2021.