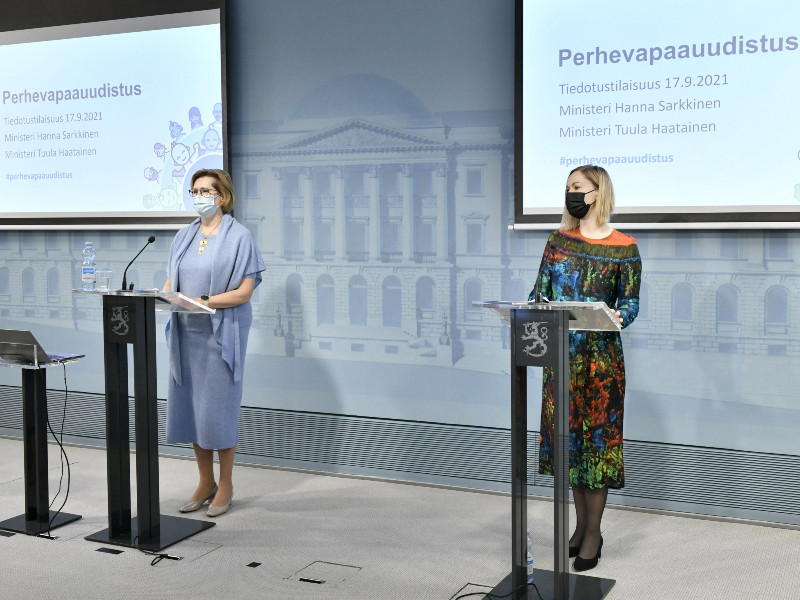 Minister of Employment Tuula Haatainen (left) and Minister of Social Affairs and Health Hanna Sarkkinen commented on the government’s family leave reform in a presser in Helsinki on Friday, 17 September 2021. (Heikki Saukkomaa – Lehtikuva)

FAMILY LEAVES in Finland are to become longer and more flexible under a reform unveiled by the government of Prime Minister Sanna Marin (SDP) on Thursday.

The objective of the proposal is to foster the well-being of children and families, and promote equality and non-discrimination in both working life and the everyday life of families with children, according to a press release from the Ministry of Social Affairs and Health.

Minister of Social Affairs and Health Hanna Sarkkinen (LA) described the reform as an investment in families with children that takes into account the variety of families: “It is also an important factor in achieving the government’s population policy objectives. This proposal will help us to move towards a more socially sustainable society.”

Helsingin Sanomat on Thursday wrote that one of the major changes brought about by the reform is an increase in the eligibility periods for parental allowance.

The reform, however, would grant each parent with a 160-day quota for the earnings-based allowance and the pregnant parent a 40-day pregnancy allowance to safeguard the last part of the third trimester, raising the total duration of the allowances by two months to more than 14 months. With either parent able transfer up to 63 allowance days to the other, the reform would increase the quota of fathers from 54 days to a minimum of 97 days.

Minister of Employment Tuula Haatainen (SDP) viewed that the reform sends a message to not only parents, but also to employers that both mothers and fathers are entitled to parental leave.

“Workplaces play a key role in what the general attitude is towards parents, and particularly men, taking family leave. I hope that the reform will encourage fathers to take family leave and employers to support men in doing so. The reform will also help to reduce the gender pay gap,” she stated.

Single parents, in turn, would be entitled to both quotas and would be able to hand over up to 126 days of their quota to, for example, their partner.

The reform would grant the right to parental allowance to parent or parents who are the guardians of the child, regardless of whether they are male or female, biological or adoptive parents, or custodial or non-custodial parents. People who have recognised their parenthood of the child would also be entitled to the allowance for four months starting with the birth of the child.

The reform would also increase timing flexibility. While the current system dictates that parental leaves must be taken immediately after the maternal leave, which means the parental allowance ends when the child is roughly nine months old, the reform would make the allowance available until the child is two years old.

The allowance days could additionally be distributed over several periods and the allowance payable partly to parents working part-time.

Only the pregnancy allowance would have to be used in a single continuous period starting 14–30 days before the estimated due date.

The reform would introduce no changes to the child home care allowance, mostly at the insistence of the Centre. It would, though, make the allowance available earlier, starting from 160 days after birth, to supplement the other flexibilities.

The government estimated that the reform would increase public expenses by 80 million euros but reminded that the cost estimates vary significantly depending on how the use of parental leaves is projected to change. Fathers, it acknowledged, are unlikely to immediately take full advantage of the expanded quota, given that most currently choose not to use part if not all their paternal allowance.

Studies indicate nevertheless that parental leaves allocated for fathers are an effective means to encourage fathers to utilise parental leaves. Such results have been reported in, for example, Sweden.

The government has accordingly described the reform as an investment in families, rather than an employment measure.