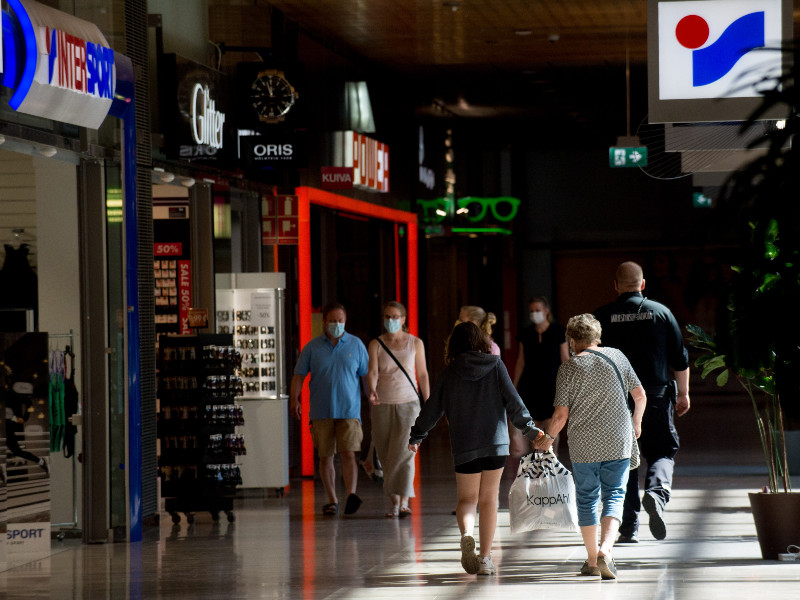 Customers at Sello Shopping Centre in Espoo on 27 July 2021. Danske Bank says private consumption will push economic growth to 3.3 per cent in 2021 and 3.0 per cent in 2022 in Finland. (Mikko Stig – Lehtikuva)

THE CORONAVIRUS pandemic is no longer casting a massive dark cloud over economic growth in Finland.

Danske Bank on Wednesday reported that it expects the national economy to expand this year by 3.3 per cent, instead of the 2.6 per cent it forecast earlier, driven primarily by pent-up demand from households. It also revised up its growth forecast for next year – by 0.1 percentage points to 3.0 per cent.

“We have raised our growth forecast especially in regards to the ongoing year,” commented Jukka Appelqvist, an economist at Danske Bank. “The outlook for the rest of the year and winter has remained largely unchanged since we compiled our previous forecast. The development we have witnessed, however, has been better than forecast.”

“Next year, the economy will continue to grow rapidly thanks to a solid carry-over effect, but the growth will then slow down.”

Finland, the financial services provider estimated, has emerged from the crisis relatively unscathed. While the economic situation has traditionally reflected swings in export demand and investment activity, the pandemic has brought a change to that, too.

“Economic development has been firmly linked to fluctuations in private consumption, even though the global crisis was visible to some extent also in exports in spring 2020. There is still loads of room for domestic consumption to recover, which will sustain brisk economic growth later in the autumn and winter,” said Appelqvist.

Danske Bank also predicted that house prices will rise by 3.8 per cent on average, at the fastest clip in a decade.

“The prices will increase more in growth centres. We expect the situation to even out next year and the increase in house prices to return in line with the mean increase in consumer prices,” he commented.