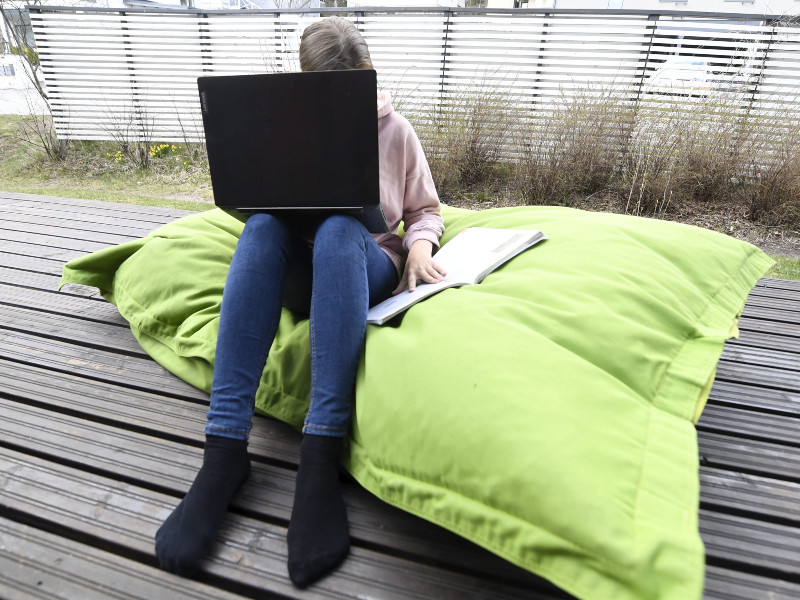 An eight-grader studying remotely at home in Espoo on 27 April 2020. (Vesa Moilanen – Lehtikuva)

THE COVID-19 epidemic has taken a greater toll on the well-being of girls than boys, suggests a national student health survey conducted by the Finnish Institute for Health and Welfare (THL).

Girls, the biennial survey found, have experienced more anxiety and loneliness, been less satisfied with their life, and perceived their health as average or poor more often than boys in the unusual circumstances.

Almost 265,000 young people in years 4–5 and 8–9 of basic education and years 1–2 of vocational and general upper secondary education responded to the survey last spring.

While similar gender-based differences were detected also two years earlier, it appears that the well-being of girls has deteriorated further, leading to a marked gap especially at the upper end of the age spectrum of the respondents.

“There’s surely no single reason for this,” Jenni Helenius, a development manager at THL, stated to Helsingin Sanomat on Thursday.

The signs, though, are alarming enough to demand that more attention is paid to the issue. Experiences of sexual harassment, for example, have increased among girls in a relatively short period of time, with the share of girls with such experiences from the past year jumping from 33 to nearly 50 per cent between 2019 and 2021.

“We have to interfere in the harassment experienced by girls,” underscored Helenius.

She pointed out that the majority of children and young people appear to be largely satisfied with their life and to enjoy school, even though a minor dip in life satisfaction has been recorded in the past years.

Helenius reminded that the coronavirus crisis has been challenging for children and young people across age groups, irrespective of gender.

It appears that well-being has deteriorated especially among girls, with 30 per cent of girls reporting they have had moderate or severe anxiety in the past two weeks, signalling an increase of 10–17 percentage points from 2019.

Feelings of anxiety were contrastively reported by only eight per cent of boys.

“Boys are more prone to showing their unease externally, as concentration difficulties or acts of aggression, whereas girls often respond to loneliness by withdrawing and feeling anxious,” Niina Junttila, a professor of educational psychology at the University of Turku, told Helsingin Sanomat.

Katariina Salmela-Aro, a professor of education at the University of Helsinki, reminded the newspaper that a shift in the well-being of girls was detected in the school health survey as early as in 2015.

The differences have since widened.

Salmela-Aro has led research projects on, for example, school fatigue, finding that almost 30 per cent of girls today, but only 12–13 per cent of boys, have experienced fatigue. Girls appear to be under greater pressure to succeed, with social media possibly exacerbating pressures about looks and finding one’s own path in life and place in society.

“Girls start to feel pressure in adolescence about not only school, but also about life more broadly. Years seven to nine of basic education are especially a very sensitive period of identity searching.”