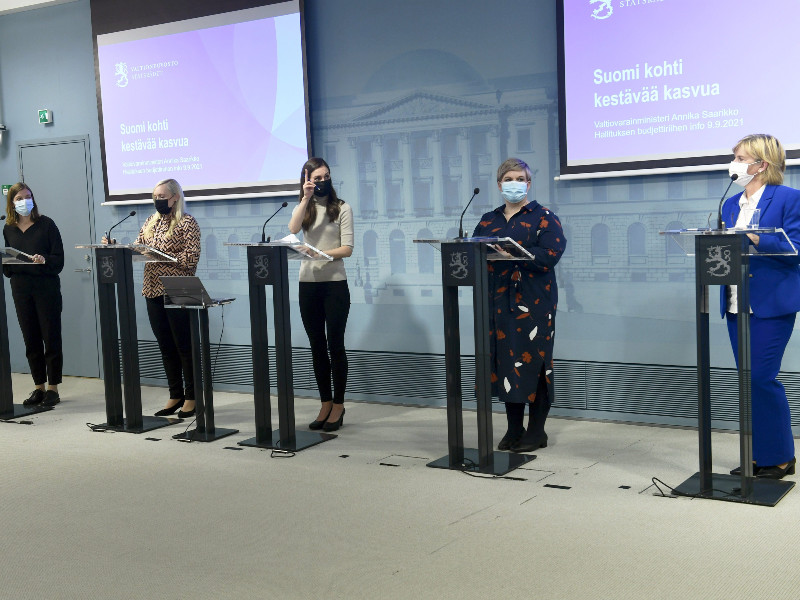 The chairpersons of the five ruling parties unveiled their budget proposal for next year at a news conference in Helsinki on Thursday, 9 September 2021. (Emmi Korhonen – Lehtikuva)

DEBATE about climate actions has overshadowed the lack of much-needed structural economic reforms in the budget proposal unveiled by the Finnish government on Thursday, views Kai Mykkänen, the chairperson of the National Coalition Parliamentary Group.

“This was a farce. And you can stop to think if this was a deliberate farce for someone,” he commented to Helsingin Sanomat.

“The government managed to stir up a day-long dispute over very small amounts of carbon dioxide emissions. This overshadowed the employment work that was kept in the spotlight during the summer by the Centre. Now it was forgotten.”

Mykkänen stated to the newspaper that the core problem with the budget proposal is that the borrowing is not reined in despite the positive economic development witnessed in the wake of campaigns to vaccinate the population against Covid-19. The 64.8-billion-euro budget shows a deficit of 6.9 billion euros due to, for example, costs arising from the creation of welfare districts as part of the social and health care reform.

“We’re running up over six billion euros in debt during an upswing even though we should be saving up for a rainy day. There’s billions of uncovered debt without any proper employment measures,” he said.

“Instead there’s a promise to return to the spending framework under the next government in 2024, when the economic spurt is probably already over.”

While Mykkänen said the climate measures undertaken by the government point in a sensible direction, he gauged that the government’s indecision is evident in the temporary decisions made on police and research appropriations. The government raised police appropriations and effectively called off the 40-million-euro cut in the funding of the Academy of Finland for 2022.

“Delaying the threat of lay-offs and adjustments by a year is of no help to police or researchers. This isn’t long-term research funding. This is an unsustainable road,” he slammed.

YLE on Friday reported that the budget proposal – specifically, the continued borrowing, lack of structural reforms and employment measures – has come under criticism also from industry and business interest groups.

“The government itself raised expectations for finding a solution to the acute skills shortage. A couple of good decisions were made, but the results are lean when examining the whole,” commented Mikko Valtonen, a senior expert at Finland Chamber of Commerce.

CEO Juha Romakkaniemi added that although stimulus-based policy was a rational approach during the pandemic-induced downswing, borrowing to the extend proposed by the government is questionable this year and a blatant mistake next year.

“Continuing the stimulus policy in the budget for next year is a blatant mistake that will come back to haunt us in future,” he warned.

“It is irresponsible that the government is not making adjustments or carrying out structural reforms that genuinely increase employment,” echoed Mika Kuismanen, the chief economist at the Federation of Finnish Enterprises.

More criticism, some praise from industry

The Finnish technology industry expressed its concern about the lack of employment measures and limited investments in research and innovation.

“Rather than promoting local bargaining and staggering earnings-related unemployment security, the government is pushing employment measures to a later date, as if there is no rush to improve the capacity of our economy,” stated Jaakko Hirvola, the managing director of Technology Industries.

Finnish Forest Industries, in turn, voiced its disappointment also with the uncertainty arising from indebtedness and lack of long-term approach to industrial policy.

“The government was incapable of making decisions that restore confidence in responsible economic policy-making,” stated CEO Timo Jaatinen. “Continuing and strong public borrowing will undermine the predictability of the operating environment for companies operating in the country.”

The shift away from bans to incentives signals light at the end of the tunnel for the energy industry.

“The measures will reduce production costs in heating while reducing emissions. Incentives are a good approach when you want to deliver results that are impactful from the viewpoint of climate policy,” rejoiced Jukka Leskelä, the managing director of Finnish Energy.

Greenpeace Finland and the Finnish Association for Nature Conservation (SLL) both said they are pleased to see the climate take centre stage during a political process, but reminded that the climate actions must continue also after the budget session.

“The necessary emissions reductions have been compiled on paper, but it is another matter entirely whether they form a coherent whole that withstands critical examination. Luckily there is a clear desire, deadline and objective for this critical examination so that delivering the emissions reductions is not contingent on gut feelings,” said Kaija Kosonen, a climate and energy expert at Greenpeace.

WWF Finland estimated that the compromise on climate actions is nonetheless insufficient, adding that it is particularly disappointing that the government was reluctant to introduce to methods that have been proven effective, such as taxation and emissions trading, to its climate toolkit.

“The emission effects of the newly approved measures by 2035 are partly based on guesses. The government is not taking enough responsibility for climate goals,” told Bernt Nordman, the head of climate policy at WWF Finland.

“The package is very modest in regards to agricultural emissions. This creates pressure for a timely reform of agricultural subsidies.”

The climate measures as a whole lack ambition, summarised Markku Ollikainen, the chairperson of the Finnish Climate Change Panel. The government, he highlighted to the public broadcasting company, did not even discuss the possibility of raising the fuel tax, opted not to raise the purchase subsidy for electric vehicles and over-estimated the effects of its decisions on transport emissions.