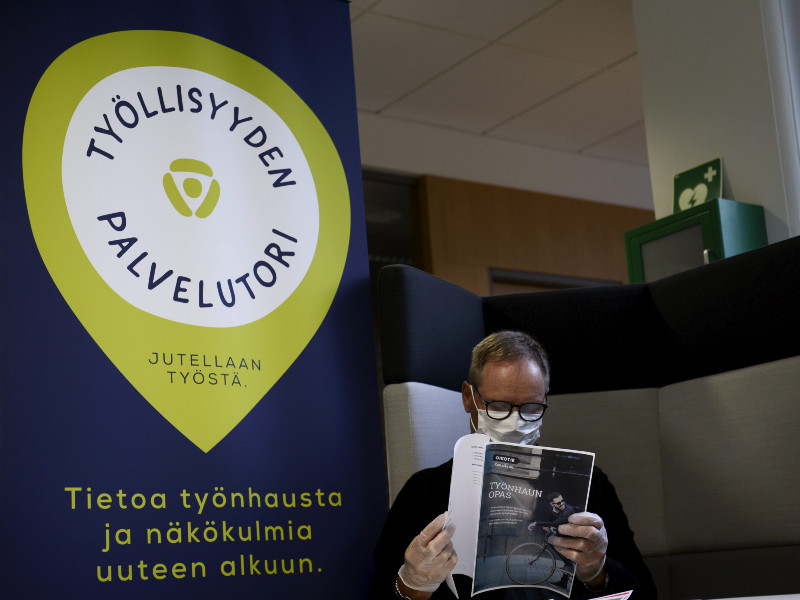 A man reading a brochure in a TE Office in Pasila, Helsinki, on 28 July 2020. While Finnish companies are struggling to find skilled applicants for their open positions, about 300,000 people remain unemployed or temporarily laid off in Finland. (Olivia Ranta – Lehtikuva)

NEARLY THREE-QUARTERS of Finnish companies estimate that their operations have been hampered by the shortage of skilled labour in Finland, reveals a member survey carried out by Finland Chamber of Commerce.

A total of 1,297 companies from various industries responded to the survey, with more than half of them stating that they simply have not gotten enough applicants for job vacancies.

Only 2.3 per cent of respondents contrastively reported that there has been an oversupply or great oversupply of labour.

The intense competition for applicants has also present other, more general challenges, as have the limited work experience and incompatible qualifications of many applicants. Finland Chamber of Commerce highlighted that the situation has deteriorated noticeably over the past year, with the share of companies reporting they have been affected negatively by the shortage rising from about 50 to 75 per cent.

Over two-thirds (68%) of the companies surveyed this year stated that the shortage has limited their growth and operations.

“We have taken a big leap in the wrong direction in the past year. We are genuinely concerned that economic growth will splutter unless rectifying measures are adopted without delay,” said Mikko Valtonen, a senior specialist at Finland Chamber of Commerce. “The survey results send a sobering message, and the situation looks extremely subdued for labour supply.”

He pointed out that the woes of one of the most severely affected industries, the social and health care industry, are under-represented in the responses given the membership structure of Finland Chamber of Commerce.

The situation appears even bleaker in light of the fact that many companies expect their labour needs to increase as a consequence of strong economic growth.

Nearly two-thirds (64.5%) of the companies predicted that their recruitment needs will increase or increase significantly in the coming six months. As many as three-quarters of companies expect to require additional employees sometime in the next two to three years.

“We are therefore not dealing with a fleeting problem, but the situation will erode year by year unless something is done,” noted Valtonen.

While the labour shortage continues to hinder business operations, almost 300,000 people remain unemployed or temporarily laid off in Finland. The primary reason for the labour-market mismatch from the perspective of businesses is incompatible qualifications, an issue that should be tackled by aligning education contents better with the needs of labour markets, according to the companies.

It has also expressed its support for measures such as facilitating immigration procedures and channelling additional resources to the processing of residence permit applications to promote employment growth.