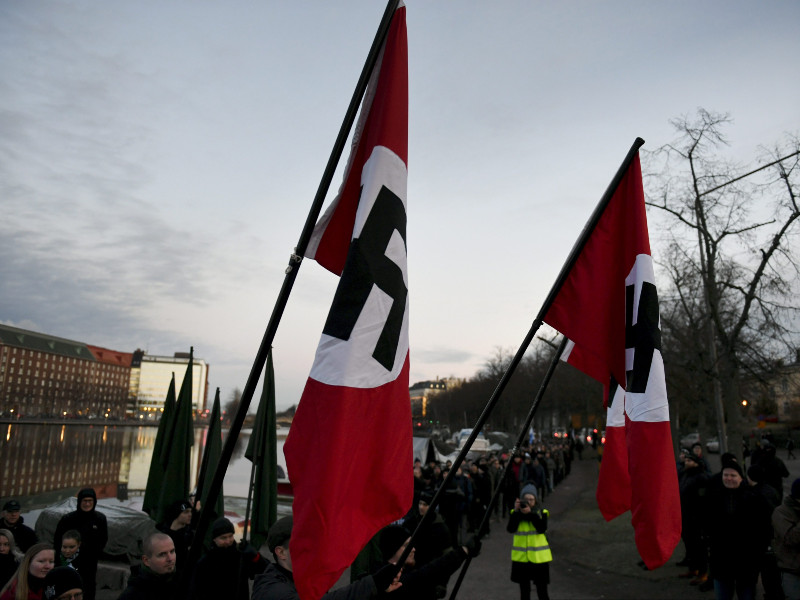 Nazi flags were paraded during a far-right protest organised in Helsinki on 6 December 2018. (Martti Kainulainen – Lehtikuva)

THE DISTRICT COURT of Helsinki has acquitted five men of the ethnic agitation charges arising from their roles in the appearance of swastika flags during a far-right protest organised in Helsinki on Independence Day in 2018.

YLE on Monday reported, citing the indictment, that three of the defendants were carrying the flags, the fourth had organised the protest march and the fifth assisted with the flags.

While the District Court of Helsinki acknowledged that by parading the flags the men had sent a message that echoes the ideologies of 1940s Nazi Germany. The act of parading the flags alone, however, was deemed not to meet the elements of ethnic agitation, which is defined as defaming, slandering or threatening a population group based on, for example, race or religion.

“It was not demonstrated in the case that the swastika flag delivers a slandering or threatening message that is linked to opposition to immigration,” the ruling reads.

The court also rejected the charge of obstruction of a public official, a charge that arose from the attempts of four defendants to prevent police officers from confiscating the flags. Police, the court ruled, had no justification for interfering in the freedom of assembly of people participating in the march.

One of the participants was nonetheless fined for ethnic agitation over a speech he delivered at a school yard in Helsinki. A fine was issued also to a woman who shot and streamed the speech.

Prosecutor General Raija Toiviainen told YLE on Monday that she is considering requesting leave to appeal against the ruling.

“I was thinking that this would be a fairly straightforward case, but I see now that this requires some deliberation. The charges were justified in my own view. I’ll have to familiarise myself with the court’s arguments,” she commented.

Swastika flags are not prohibited in Finland, unlike in some other countries in Europe. The case represents the first time that a court is commenting on the exhibit of the flags through the lens of the criminal code.

Kimmo Nuotio, a professor of criminal law at the University of Helsinki, said he is surprised by the ruling, viewing that it would be good if the case was examined by a court of higher instance.

“The district court now called attention to freedom of speech on the one hand and right to protest on the other,” he analysed, adding that the possibility of banning the insignia may be debated also in Finland. “It’s a completely justified question, at least if this trial leads to the clause on ethnic agitation not being applied to prohibit the Nazi flag.”