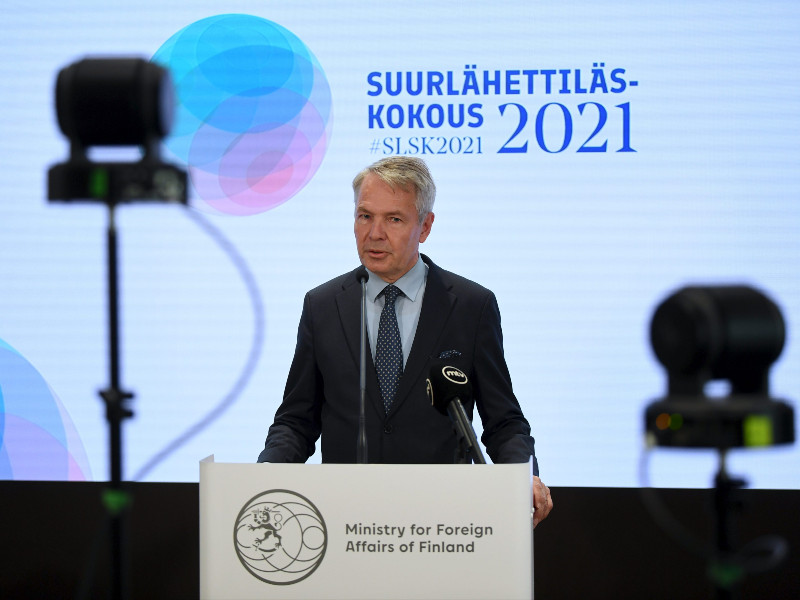 Minister for Foreign Affairs Pekka Haavisto (Greens) spoke to reporters during a media availability at the annual meeting of the heads of Finnish missions in Helsinki on Tuesday, 24 August 2021. (Antti Aimo-Koivisto – Lehtikuva)

THE GOVERNMENT of Prime Minister Sanna Marin (SDP) will expand its evacuation operation in Afghanistan to cover the security staff at the Finnish Embassy in Kabul, Minister for Foreign Affairs Pekka Haavisto (Greens) announced on Tuesday.

The government made the decision at an extraordinary meeting held before the press conference that began at 9pm.

Haavisto on Tuesday revealed that up to 83 security staff and their families will be evacuated from the city, which fell under the control of Taliban on Sunday, 15 August. The number of evacuees has increased by another 45 with the addition of people who had worked directly for the embassy and their family members.

The evacuations thereby cover a total of 298 people of Afghan backgrounds.

Haavisto said the country has thus far evacuated 250 people from Afghanistan, including 150 of the 170 locals it had referred to earlier. Finland will also seek to evacuate the roughly 100 Finnish citizens and permanent residents who have requested consular protection.

The security staff were initially not part of the evacuation operation, but the stance was re-considered on grounds of the security threat they face.

“The threat faced by the people who’ve been responsible for security is deemed to be particularly great because of their role in safeguarding the security of our diplomatic personnel,” explained Haavisto.

He also acknowledged that it is unlikely that everyone can be evacuated by the end of the month – the closing of the window of opportunity provided for the evacuations by the United States.

“The list can’t grow as far as local evacuees are concerned because of the time window. It’s probably more likely that we can’t reach or help all of the people on the list,” he said, citing the extremely difficult operating environment in Afghanistan.

“The security situation in Kabul has deteriorated day by day.”