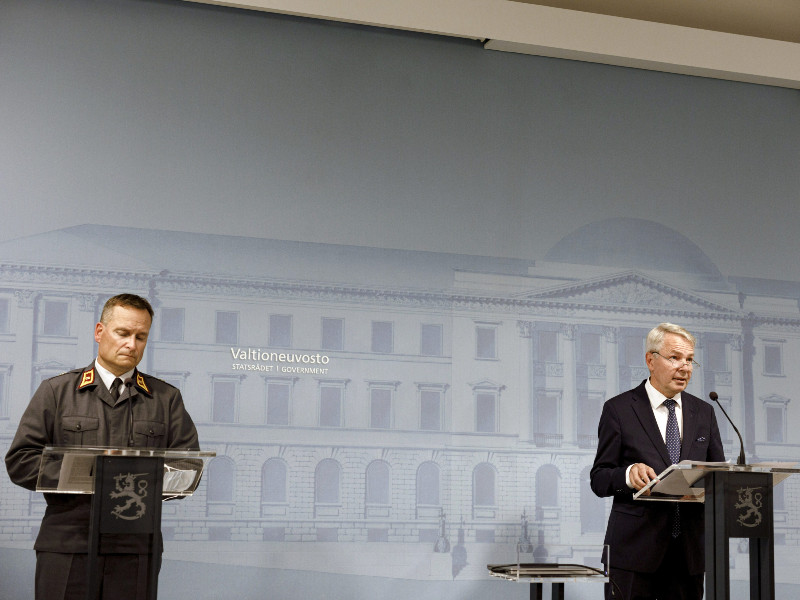 Kari Nisula of the Defence Command (left) and Minister for Foreign Affairs Pekka Haavisto commented on the ongoing effort to evacuate people from Kabul, Afghanistan, in Helsinki on Sunday, 22 August 2021. (Seppo Samuli – Lehtikuva)

APPROXIMATELY 110 people have been evacuated from Kabul, the capital of Afghanistan, to Finland.

Minister for Foreign Affairs Pekka Haavisto (Greens) on Sunday stated in a news conference that the operational capacity of the five-person team coordinating the evacuations on site has improved significantly following the arrival of a support unit from the Finnish Defence Forces.

“These results wouldn’t have been possible without these support troops,” lauded Haavisto.

The unit is operating at and in the immediate vicinity of the airport in Kabul, according to Kari Nisula, the assistant chief of staff operations at the Defence Command. Circumstances at the airport are extremely challenging and constantly deteriorating, with reports suggesting seven civilians died amid panic outside the airport on Sunday.

Haavisto described the security situation in the country as extremely fragile. Although no large-scale military clashes have reportedly broken out since the takeover by Taliban, there have reports of smaller clashes and house raids.

The Ministry for Foreign Affairs reported earlier yesterday that roughly a dozen people were evacuated from Kabul on Saturday and over 50 on Sunday. Haavisto specified that the evacuees include a number of current or former people of Afghan backgrounds who worked at the Finnish Embassy in Kabul.

“They’re coming with their families. The youngest to my knowledge is a few-week old child,” told Haavisto.

Finland has previously stated that it is looking to evacuate a total of 240 people from Kabul, which fell under the rule of Taliban on 15 August. Seventy of them are Finnish nationals or permanent residents of Finland and the remaining 170 people who themselves or whose family members had worked for Finland, Nato or the European Union in Afghanistan.

“We’ve brought to safety almost half of the Finnish nationals and foreigners permanently residing in Finland who, judging by their own reports, are in need of emergency assistance,” said Haavisto.

Jari Kähkönen, the director general of the Finnish Immigration Service (Migri), on Sunday revealed the evacuees will be housed initially in reception centres to allow them to rest after the stressful experience. The process of providing them with residence permits and other types of assistance will begin later.

Kähkönen took part in the press conference via a video link.

Haavisto also pleaded with both the public and media to not disrupt the efforts of officials working in the challenging circumstances. It is especially important, he stressed, that no details of the evacuation flights or routes are disclosed due to the possibility of attempts to disrupt the flights.