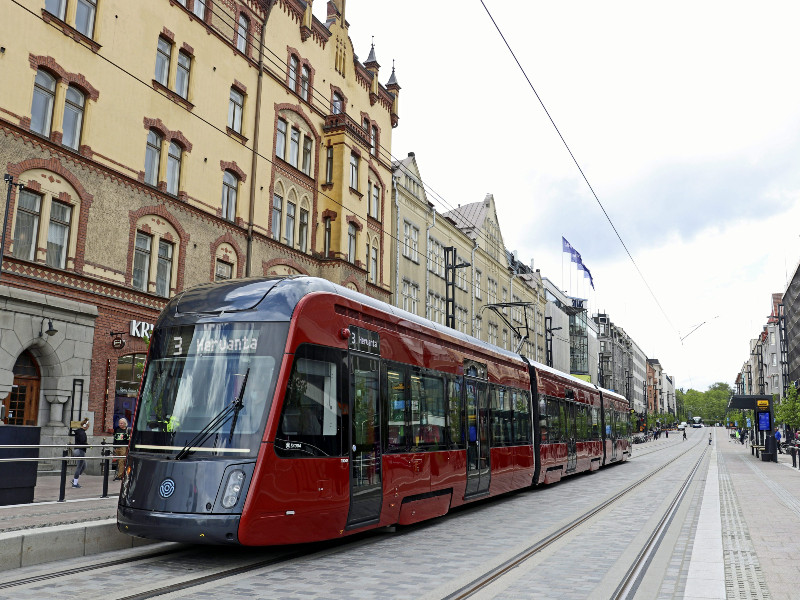 The brick-red trams were in test operation in central Tampere on 27 May 2021. (Tarja Repo – Lehtikuva)

TRAMS in Tampere began their regular operation on Monday, 9 August 2021. The brick-red carriages will transport commuters from Pyynikintori Square to Lake Hervantajärvi, and from Tampere University Hospital to Sori Square.

The official opening ceremony was held virtually on Sunday. The trams had been in test mode since last spring.

The substantial infrastructure project was completed on schedule, in spite of the material supply issues caused by the coronavirus pandemic, and came in under budget, according to Helsingin Sanomat.

The project was launched formally in 2016 by the city board, led by current Prime Minister Sanna Marin (SDP). The City of Tampere also founded Tampereen Raitiotie to construct the tramways, promote and maintain tram operations, and ensure the functioning of the system. The trams themselves are operated by VR, while ticket sales are the responsibility of Tampere Region Transport.

The project was carried out in accordance with the alliance model, a project model founded on mutual agreements and collaboration between the parties. The parties set both the schedule and cost targets for the project.

“The starting point is that it’s about working together,” Pekka Sirkiö, the managing director of Tampereen Raitiotie, commented to Helsingin Sanomat. “The owners, designers and service producers all sit at the same table and look for solutions to problems together. If no solution is found, also the service producers will lose their remuneration.”

The owners of the project were Tampereen Raitiotie and the City of Tampere.

Sirkiö stated to the newspaper setting the cost targets is one of the key challenges linked to the alliance model because the owners naturally prefer to keep the targets as low as possible, whereas the service producers prefer to keep them at a level that increases the likelihood of rewards for coming in under the budget.

“The goal is to fall short of the cost targets, but it can’t be possible too easily with a normal work effort,” he outlined.

The ideology of the model, he added, is such that new methods and innovations are needed constantly to ensure optimal performance. That is also why performance goals in key result areas must be set sufficiently high.

The project has been on schedule, if not ahead of it, since the beginning, regardless of the supply issues caused by the pandemic. The service producers were able to overcome the issues by re-organising work stages and acquiring substitute materials, according to Sirkiö.

The project also came in about 34 million euros under the 300-million-euro budget.