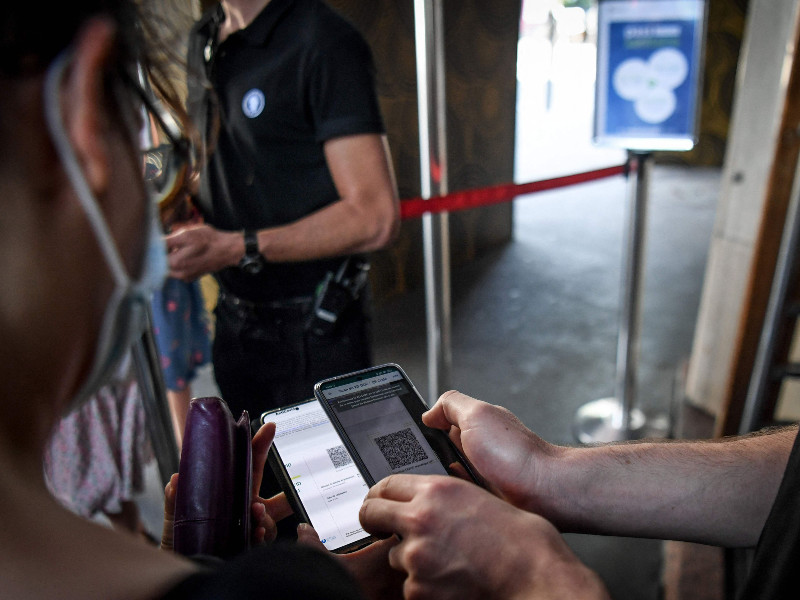 A woman has her health passport checked before gaining entry to a cinema in Paris, France, on 21 July 2021. In France, people are required to demonstrate they have been vaccinated against the coronavirus to enter places such as cinemas, museums and sports venues. (Alain Jocard – AFP/Lehtikuva)

THE FINNISH government is set to make key decisions regarding its strategy to combat the coronavirus epidemic in an unprecedented epidemiological situation.

The number of laboratory-confirmed coronavirus infections has not decreased in the summer months despite the ongoing vaccinations, with the virus spreading rapidly especially among young adults. The effect of vaccinations is nevertheless evident in how the infections translate to demand for special health care services.

The Finnish Institute for Health and Welfare (THL) on Monday reported that 297 new infections have been detected in the country. Only eight people, however, were in intensive care with symptoms caused by the virus.

The government is in the coming weeks set to re-examine not only its hybrid strategy for combating the epidemic, but also the need for additional restrictions and tools such as a coronavirus passport in the prevalent epidemiological situation.

Deputy Prime Minister Pekka Haavisto (Greens) told YLE yesterday that he is supportive of introducing the passport, in spite of the legal discussion the possibility has stirred up. The question is fundamentally whether citizens are treated equally if the unvaccinated are denied access to places accessible for the vaccinated.

Haavisto viewed that it would make no sense to demand people entering libraries to present the passport but reminded that it could enable event organisers to operate and people to frequent restaurants.

“From a public-health viewpoint, the coronavirus passport or health passport would make a ton of sense. You could possibly organise larger gatherings and events without fear, given that you’d know everyone has been vaccinated,” he said to the public broadcasting company.

The passport has been introduced in countries such as France, Germany and Greece. In France the passport is a requirement for entering a restaurant, for example.

The notion received support also from Eeva Ruotsalainen, a deputy chief physician at the Hospital District of Helsinki and Uusimaa (HUS). The hospital district, she pointed out, has witnessed a fivefold increase in infections in a short period of time.

“I do support the coronavirus passport. I’m probably talking mostly about restaurants, concerts and public events. Now in Finland it’s possible to go to all events [in areas] in the baseline [phase of the epidemic]. That’s precisely why the disease is spreading at large events,” she analysed to YLE.

Ruotsalainen reminded that there are other factors to consider besides the strain placed on intensive care resources.

“What’s most important is the person, or patient. Even though special health care is holding up at this point, basic health care and contact tracing are in a slough. Adolescents and young adults getting the long-lasting coronavirus disease is concerning. Us being able to return to normal isn’t a reality right now,” she stated.

Olli Vapalahti, a professor of virology at the University of Helsinki, welcomed discussion on the passport, estimating that it would enable service providers to continue operating and would not be required for longer than some months.

“These special arrangements wouldn’t be for the long term, and maybe it’s acceptable from this viewpoint,” he told YLE.

Although the vaccination coverage will continue increasing in the coming months, it remains necessary to slow down the spread of the virus, according to Vapalahti.

“It’s good to try to delay or limit the fourth wave to make sure as many as possible have time to get protection from the vaccines. With the infections rising at this rate, it’s probable we’ll have to slow it down sooner or later and that’s easier to do when the case numbers are counted in hundreds rather than thousands.”

Vapalahti also expressed his willingness to consider imposing restrictions on bars and nightclubs, for instance.

“How much do we allow the virus to circulate in these circumstances? It’s clear that the risk groups have been largely inoculated and there’s no fear of the kind of catastrophe that there was a year ago. People are still not vaccinated. Especially the number of people who have gotten two injections is still relatively low. And the meaning of long Covid is unclear. This is why we can ill-afford to let the virus spread freely.”

No new nationwide restrictions will be adopted until the end of summer holidays for cabinet members and officials at the Ministry of Social Affairs and Health in August.