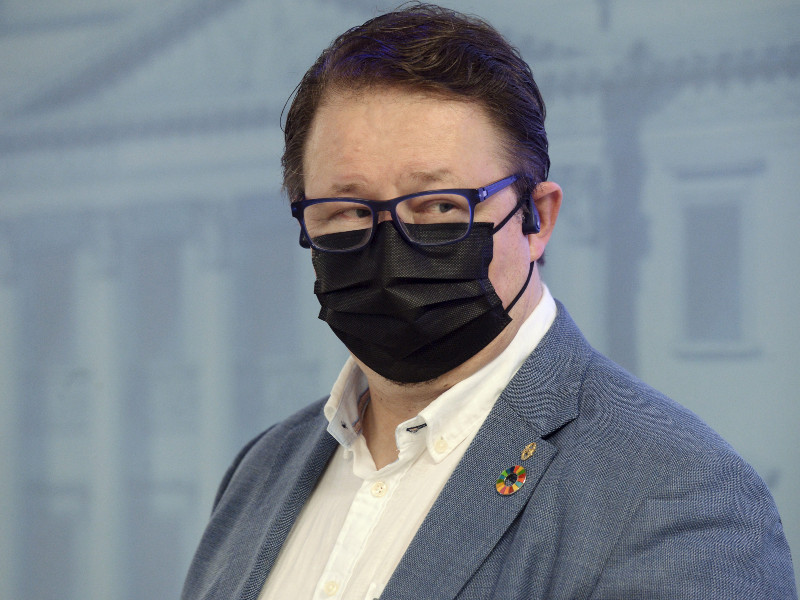 Mika Salminen, the head of health security at the Finnish Institute for Health and Welfare (THL), reacted at the weekly coronavirus briefing in Helsinki on 17 June 2021. (Mikko Stig – Lehtikuva)

THE INTERVAL between the priming and booster dose of coronavirus vaccines cannot be reduced across the population with the current supply of vaccines in Finland, tells Mika Salminen, the head of health security at the Finnish Institute for Health and Welfare (THL).

The idea has been discussed in public following a statement by Minister of Family Affairs and Social Services Krista Kiuru (SDP).

Kiuru on Friday said to Helsingin Sanomat Finland should consider reducing the interval between the injections in response to the vaccinations not progressing on schedule due to people postponing the booster dose because of holidays. Reducing the interval, she suggested, would be a prudent decision also because two vaccine doses provide a clearly better protection against the rampant delta variant than one.

“I’ve mulled over with health care authorities how we could move forward the booster doses so that there’s no idling and there are no leftover vaccines to store also in future,” she said.

The interval between the priming and booster dose has typically been 12 weeks in Finland. It is considerably shorter in many other European countries.

Salminen on Monday stated to the newspaper that an eight-week interval is the shortest possible that guarantees that the vaccines provide a more effective and longer-term immune response. THL has already modelled the effects of reducing the interval to eight weeks, finding that even the theoretical benefits are limited, according to him.

“You’re only moving morbidity from one place to another, and that doesn’t reduce total morbidity one bit,” he explained.

The challenge is fundamentally the availability of vaccines: if more doses are reserved for booster doses, it will slow down the administration of priming doses. The decision would thus offer older age cohorts better protection against the virus at the expense of younger age cohorts.

Salminen reminded that even a single vaccine injection provides relatively sound protection against serious forms of the disease also in the case of the delta variant.

“If we had an unlimited availability of vaccines, it’d naturally make sense to shorten the interval in this circumstance,” he said, estimating that the weekly number of doses would have to increase by hundreds of thousands to justify the adjustment.

Even if the availability improved sufficiently, vaccination appointment bookings would present another challenge.

“It’s difficult to start changing booked appointments on a large scale. We’re talking about tens of thousands of people who have booked an appointment. If we started re-shuffling them, it wouldn’t quite be a two-minute operation,” he told.

Finnish municipalities, though, are not prohibited from adjusting the vaccination interval to speed up the administration of booster doses if the demand for first doses is lower than expected, for example.

“Municipalities have the possibility to do this if they’ve determined that it won’t have a negative effect on the administration of first doses,” said Salminen.

“It mustn’t lead to a smaller-than-expected number of first-dose recipients.”

THL on Monday reported that 63.9 per cent of the Finnish population has received the first and 27.7 per cent also the second dose of a coronavirus vaccine.