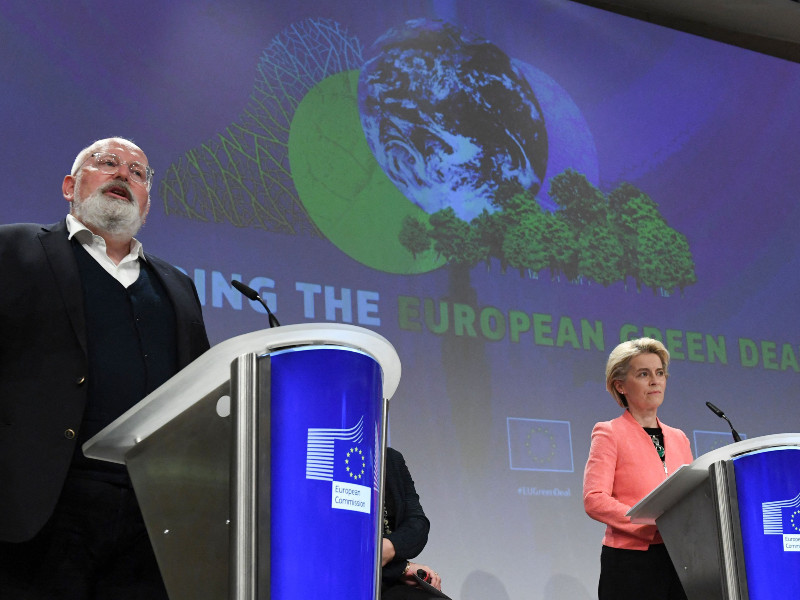 Frans Timmermans and Ursula von der Leyen of the European Commission unveiled a long list of proposals to usher in a shift to low-carbon economy at the European Parliament in Brussels on Wednesday, 14 July 2021. (John Thys – AFP/Lehtikuva)

THE CHAIRPERSON of the Finnish Climate Change Panel, Markku Ollikainen, says the European Green Deal proposed by the European Commission is not as ambitious as it should be, although it represents a significant improvement from the present situation.

“It’s a touch below what the EU should be doing. But this is a significant improvement from the previous,” he stated to YLE on Wednesday.

The European Commission yesterday published a package of proposals to overhaul climate, energy, land use, transport and taxation policies in the 27-country bloc to reduce net greenhouse gas emissions by at least 55 per cent by 2030. The emissions reductions, it stressed, are crucial for becoming the world’s first climate-neutral continent by 2050.

The proposal would, for example, augment the impact of the emissions trading system by gradually phasing out free emission allowances for aviation and bring shipping emissions within the scope of the system. It would also put a carbon price on imports in certain product categories to ensure the emission-reduction effort does not lead to carbon leakage by pushing carbon-intensive production outside Europe.

“Europe is now the very first continent that presents a comprehensive architecture to meet our climate ambitions,” declared Ursula von der Leyen, the President of the European Commission.

“We have the goal, but now we present a roadmap for how we are going to get there.”

Ollikainen told YLE that perhaps the most radical aspect of the proposal is requiring average emissions of new cars to decrease by 55 per cent by 2030 and 100 per cent by 2035. All new cars must therefore be zero-emission by 2035.

“It means there’s no longer a future for petrol and diesel-powered cars. This will surely define the actions of automotive makers,” he said.

Tero Kallio, the managing director of the Association of Automobile Industry in Finland, confirmed to Helsingin Sanomat that the decision will accelerate what is already rapid electrification of road transport.

The target, he added, is ambitious but necessary despite the fact that electrification is already underway, as automotive manufacturers require a clear roadmap for what lies ahead particularly when it comes to investments.

Ollikainen said to YLE that another surprise were the ambitious objectives in the so-called effort-sharing sectors, meaning building, housing agriculture and other sectors not incorporated in the emissions trading scheme. The European Commission raised Finland’s emissions reduction target in the sector more than expected, from 39 to 50 per cent by 2050.

“It’ll be difficult to achieve the goals related to reducing methane gas emissions in agriculture. It’s generally rather difficult to find reductions in this sector,” he said, predicting a rise in agricultural costs.

Carbon sink target not as strict as expected

Finland got off easy in the forest sector, according to him. The European Commission announced earlier it is looking to strengthen the carbon sinks of member states, sparking concerns about logging restrictions in Finland. Its proposal, however, says the country should adopt a carbon sink target of 17.8 million tonnes of carbon dioxide equivalents – several million tonnes less than the estimated size of the current sink.

“The sink target is 310 million tonnes for whole of Europe. We in Europe had a carbon sink of that scope about ten years ago, meaning the target isn’t too ambitious,” she stated on YLE A-studio on Wednesday. “I would’ve thought that Finland’s share would be higher than 17 million tonnes. If you think about our own carbon-neutrality target in 2035, we’ve outlined in that context that the sink should be 21 million tonnes. That’s about the average for the early 2000s.”

The European Commission putting together such a comprehensive package of proposals in 18 months in the midst of a global pandemic is nonetheless significant, according to Mikkonen. “It’s an indication that the EU is taking the climate crisis seriously,” she was quoted as saying in a press conference by Helsingin Sanomat.

The European Green Deal was received with disappointment in the Finnish forest industry.

Timo Jaatinen, the managing director of the Finnish Forest Industries Federation, described the proposal as one-sided on YLE's A-studio: “Forests are seen only as carbon sinks or from the perspective of biodiversity, which is naturally important, but forests also offer solutions. This perspective is missing from the commission’s package, and that’s specifically where Finland has a lot to give.”

He also voiced his frustration that the proposals consist of plenty of regulation.

“This is more a programme for hitting the brakes and regulating. This will still require a lot of lobbying from Finland,” said Jaatinen.

Also he nevertheless acknowledged that the carbon-sink objective is not impossible to reach. Because logging volumes vary on a year-by-year basis, though, it would be critical to focus on long-term sustainability in the forest industry.

“Years aren’t brothers. Our carbon sink was big last year because we had strikes and factories had stoppages. We had a down year due to the coronavirus. But now we’re having a different kind of year, an up year,” told Jaatinen.