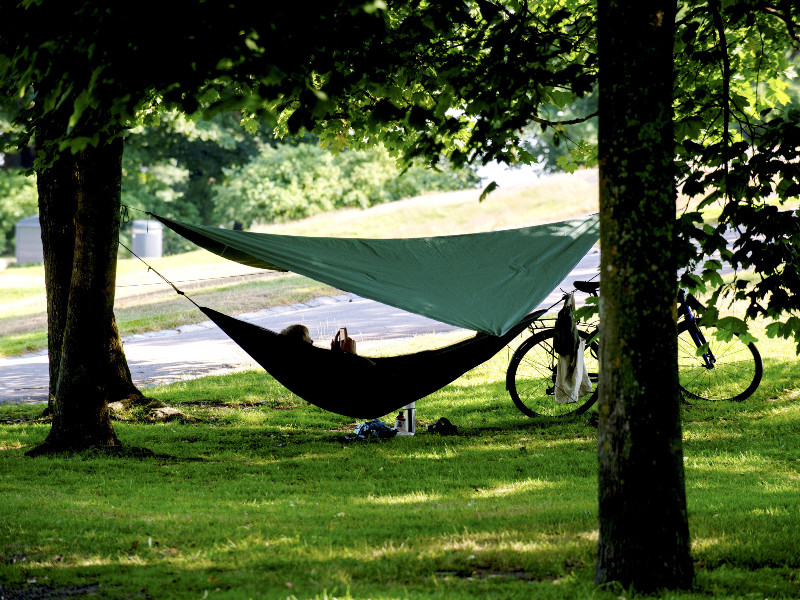 A person resting in a hammock under the shade of trees in Helsinki on 10 July 2021. (Mikko Stig – Lehtikuva)

TODAY AND TOMORROW may be the hottest days of the whole summer in Finland, writes Helsingin Sanomat.

The weather has been unusually warm for almost a month, with the temperature rising over 25°C in most parts of the country also on Tuesday. The mercury is today forecast to fall short of 20°C in Northern Lapland but rise to 30°C in Southern and Central Finland.

Meteorologists believe this week may deliver temperatures higher than the record of 33.6°C set for the summer in Parikkala, Southern Karelia, around Midsummer.

“On Thursday, temperatures could rise to 32–33°C in Eastern Finland. There’s a small possibility that the heat record is broken in Southern or Eastern Finland,” Ari Mustala, a meteorologist on duty at the Finnish Meteorological Institute (FMI), commented to Helsingin Sanomat on Tuesday.

“The heat record is under threat around Thursday,” echoed Ilkka Alanko, a meteorologist at Foreca.

The temperature has risen over 25°C in at least some parts of the country every day since 17 June. On Thursday and Friday, however, the hottest air will start moving south-east, gradually giving way to cooler weather from the north. The mercury should nonetheless climb over 25°C also next weekend.

He said it seems that the 30-degree mark will not be broken in any parts of the country after Friday.

“At this moment, it’s difficult to predict whether or not the cooling will be a longer-term thing,” he added.