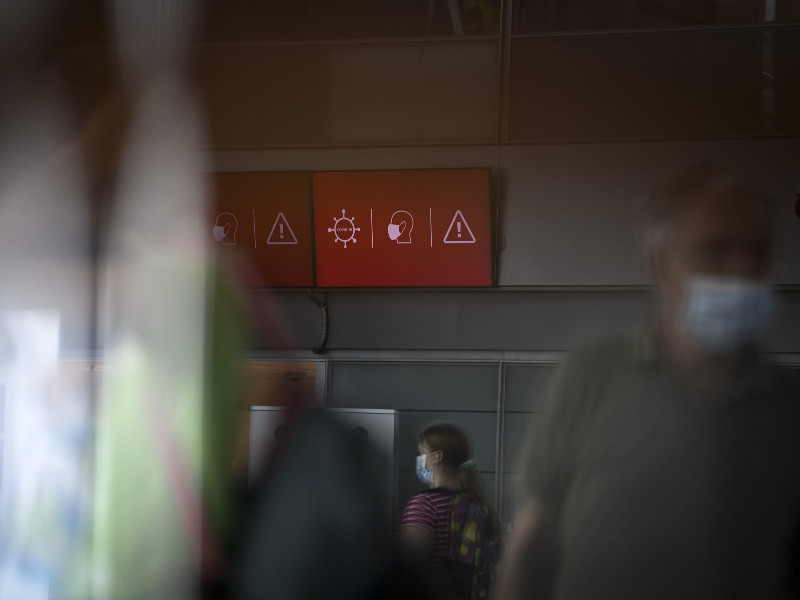 Air passengers passing by signs reminding of the threat of Covid-19 at Helsinki Airport on Tuesday, 6 July 2021. (Emmi Korhonen – Lehtikuva)

THE GOVERNMENT of Prime Minister Sanna Marin (SDP) has announced its decision to continue internal border controls for two additional weeks, until 25 July.

The Ministry of the Interior on Thursday described the two-week extension will serve as a short transition period that prevents the entry of new coronavirus variants from overseas while municipalities and joint municipal authorities prepare to introduce new health security measures at border-crossing points.

The decision will enter into force on Monday, 12 July, at the same time as the entry rules unveiled by the government on Tuesday. The entry rules define, for example, which passengers need to have a certificate of full coronavirus vaccination, recent negative coronavirus test or recovery from the coronavirus disease in order not to be required to get tested upon arrival.

At the behest of especially Minister of Family Affairs and Social Services Krista Kiuru (SDP), the government decided to define countries with a two-week incidence of at most 10 infections per 100,000 inhabitants as low-risk countries, meaning countries not affected by the rules.

Justified with the threat posed by the easily transmissible delta variant, the entry rules are to remain in effect until mid-October.

The two decisions create a rather convoluted criss-cross of rules about entering Finland. Passengers from countries with a two-week incidence rate lower than 10 infections per 100,000 inhabitants will be allowed to enter freely.

Passenger from EU and Schengen countries with an incidence rate of 10–25 infections per 100,000 inhabitants will be allowed entry if they have a certificate of full coronavirus vaccination, recent negative coronavirus test or recovery from the coronavirus disease in the past six months, per the extension of internal border controls. Those not meeting the criteria would be allowed to enter only for work-related or necessary reasons.

Passengers from third countries with an incidence rate higher than 25 infections per 100,000 inhabitants will similarly require a work-related or other necessary reason to be allowed into Finland.

Passengers from the UK, which has reported an incidence rate of almost 480 cases per 100,000 inhabitants, will thus not be able to enter even if they have received both vaccine injections or recovered from the coronavirus disease in the past six months.

In the UK, more than 34 million people – about 64 per cent of the adult population – have received two vaccine injections and an additional 11 million people the first injection, according to the BBC.

Helsingin Sanomat on Thursday revealed that only a small number of policy makers and government officials were privy to the plan to extend internal border controls when the entry rules were announced on Tuesday.

Officials at the Finnish Institute for Health and Welfare (THL), for example, were aware of the preparatory work on the decision, but they were under the impression virtually until the news conference that the extension would be carried out only if the entry rules failed to win the support of the Parliament.