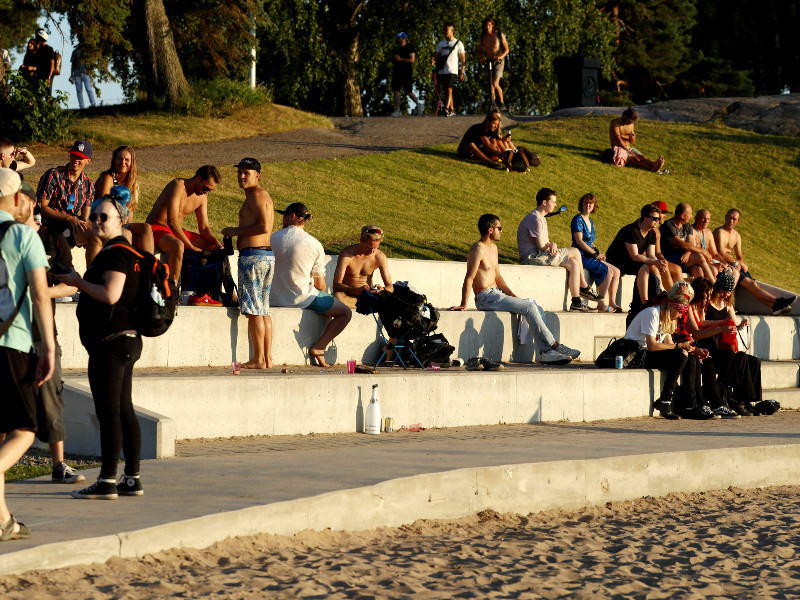 HOT SUMMER WEATHER is set to continue in Finland.

“The week will start with exactly the same that we’ve had in the past days, meaning very hot and bright,” Petri Hoppula, a meteorologist on duty at the Finnish Meteorological Institute (FMI), stated to Helsingin Sanomat on Sunday.

The mercury is forecast to creep up over 30°C in northern parts of the country on Monday. Temperatures in Southern and Central Finland, in turn, should fluctuate between 27°C and 31°C.

Scattered showers with the possibility of pop-up thunderstorms are forecast to arrive in Southwest Finland on Tuesday. The showers will track north-east toward central parts of the country during the course of Wednesday, affecting areas stretching from the Gulf of Bothnia to North Karelia in the morning and from Western Lapland to Kainuu in the afternoon.

“That’s when the skies will clear in Southern Finland, meaning these aren’t too long rains,” said Hoppula.

Temperatures are not expected to drop significantly because of the rains.

In the second half of the week, temperatures are expected to hover around 25°C with the possibility of scattered showers.

June was the warmest on record in Finland, FMI reported on 1 July. The number of days when the mercury rose to at least 25°C was more than 10 higher than usual in southern parts of the country, with the mean temperature settling at 19.3°C in Kaisaniemi, Helsinki. The national mean temperature was 16.5°C, breaking the previous, almost 70-year-old record by 0.3°C.

The hot summer weather has caused congestions in the accident and emergency units of hospitals, as both older and younger people have sought treatment for heat-related conditions, according to Helsingin Sanomat.

“We’ve especially had people with heart conditions who are exhausted and dehydrated. They may be using a lot of medications that cause their blood pressure to drop too low, making them dizzy and nauseous,” told Riikka Kettunen, the acting chief physician for emergency services at Kuopio University Hospital.

“The other groups is younger people who go outside in the heat to do activities and possibly consume some alcohol, leading to all kinds of small accidents,” she added.

“The customer numbers are clearly higher than a year ago.”

Markku Kuisma, the chief physician for emergency services at the Hospital District of Helsinki and Uusimaa (HUS), similarly told that the daily number of emergency calls has increased by over 20 per cent to well over 600, as the heat takes its toll on older people with chronic diseases and younger people releasing their bottled-up need to party and socialise.

“We’re talking about heart and lung diseases, and chronic diseases in older people getting worse,” he said.

“[The need] is being released in various ways. People pick up all sorts of minor injuries partying, like fractured ankles and fractured hands, when they have a bit too much alcohol,” he added. “And then of course there are alcohol overdoses that require emergency and hospital care. We’re seeing slightly more of those than usual too.”