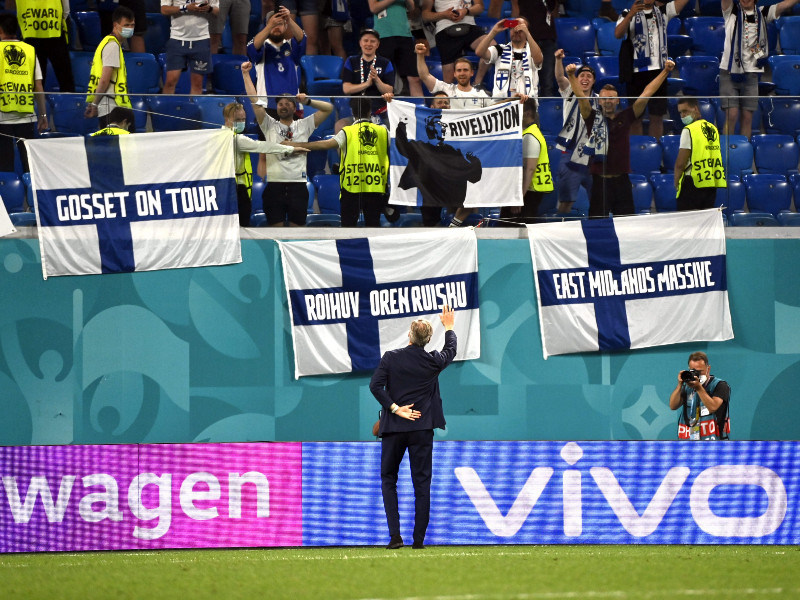 Markku Kanerva, the head coach of Team Finland, greeted supporters after a 0-2 loss in a group-B match against Belgium at Saint Petersburg Stadium in St. Petersburg, Russia, on 21 June 2021. (Emmi Korhonen – Lehtikuva)

The Kymenlaakso Joint Authority for Social and Health Services (Kymsote) on Thursday reported that almost 100 infections have been detected in samples taken at the border-crossing points in Nuijamaa and Vaalimaa.

The number is likely to increase further, according to the Finnish Institute for Health and Welfare (THL).

“It’s important that everyone who’s returning from there gets tested and that we’re able to catch the possible cases and prevent the disease from spreading,” Marin stated arriving for the European Summit in Brussels, Belgium, on Thursday.

Among the topics of the summit is co-operation on managing the coronavirus pandemic.

Marin added that Finland will not start scaling down its testing capacity yet, in spite of the progress of vaccinations. Over 3,150,000 Finns had received the first and over 915,000 also the second vaccine injection on Thursday, according to YLE.

Kymsote on Thursday also revealed it is aware of cases where a person returning from the sporting event has not complied with the voluntary quarantine. One returnee, for example, had frequented a bar and a public event before testing positive.

The joint authority decided on grounds of congestions to forgo coronavirus testing at the border-crossing point in Vaalimaa on Tuesday, consequently letting roughly 800 people who had attended the event to enter the country without testing.

THL on Thursday urged all Finns returning from St. Petersburg to get tested and avoid contact with people who are not part of the same household until receiving the test result. This, it underlined, is particularly important for those who returned on any of the 15 Neva Tours coaches that departed St. Petersburg on 22 June.

Some of the infections have been traced to a restaurant called Alpen House.

“You should get tested even if you don’t have any symptoms. It’s also very important to avoid contact,” stressed Mika Salminen, the head of health security at THL. “You should skip, for example, Midsummer parties, if you have yet to receive the result of the test taken after your arrival.”

The Hospital District of South-west Finland on Thursday reported that several infections have been detected in people who travelled between Turku and Stockholm aboard Tallink Silja’s Baltic Princess between Friday 18 June and Saturday 19 June.

Infections, it said, have so far been detected in seven passengers who were travelling in five groups that appear to have no ties to each other. It is therefore likely that the number of infections increases further.

Tallink Silja on Thursday notified passengers on the cruises of the infection cluster by text message.