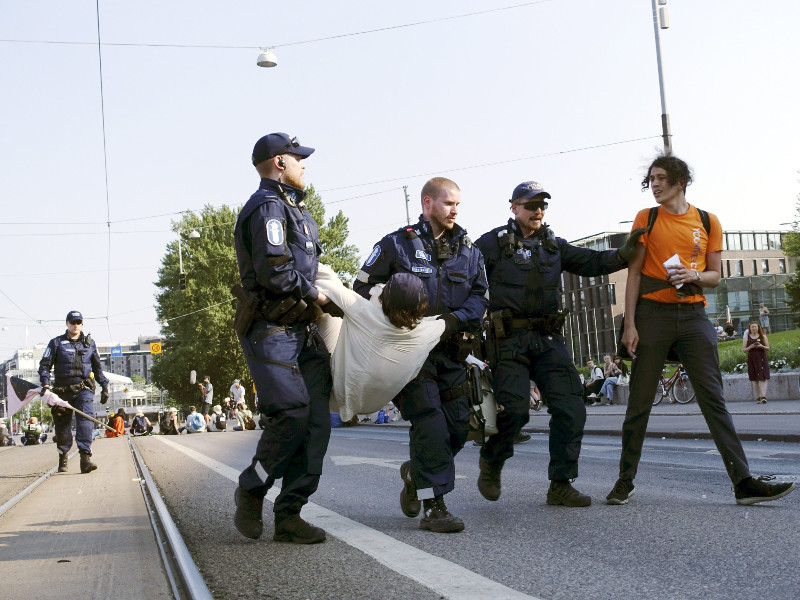 An activist watched as police officers carried another into a police vehicle in downtown Helsinki on Sunday, 20 June 2021. (Teemu Salonen – Lehtikuva)

POLICE in Helsinki brought a total of 117 people into custody in connection with a demonstration organised by Extinction Rebellion Finland on Sunday.

Helsinki Police Department reported yesterday that 104 people were taken into custody for failure to comply with police orders to vacate the road on Mannerheimintie, the main thoroughfare of Helsinki, and 12 on Unioninkatu. One more person was taken into custody for contumacy to the police in conjunction with a counter-protest organised on Sunday.

Most of the protesters were carried into police vehicles one by one by police officers, according to YLE. The police is calling for fines for everyone brought into custody.

Activists with Extinction Rebellion Finland originally gathered on Mannerheimintie on Thursday. The demonstration continued overnight, with about 120 of the participants pitching tents and rolling out mattresses on a stretch of the road outside Parliament House.

“Is it really so that police will not remove the demonstrators blocking the city’s main road but will ‘secure’ their camping in the middle of the road?” Jussi Halla-aho, the chairperson of the Finns Party, asked on Twitter on Friday. “Wouldn’t police have more important things to do at night? Are these instructions coming from [Minister of the Interior Maria] Ohisalo (Greens)?”

Ohisalo responded to Halla-aho by reminding that the minister of the interior does not determine how police deal with every demonstration.

“The chairperson of the largest opposition party should know that the minister of the interior doesn’t decide what police do in regards to every single demonstration – be it about opposing coronavirus restrictions, phasing out the use of peat or climate change,” she tweeted.

Extinction Rebellion Finland has announced its plan to continue the demonstration in a new location beyond the weekend.