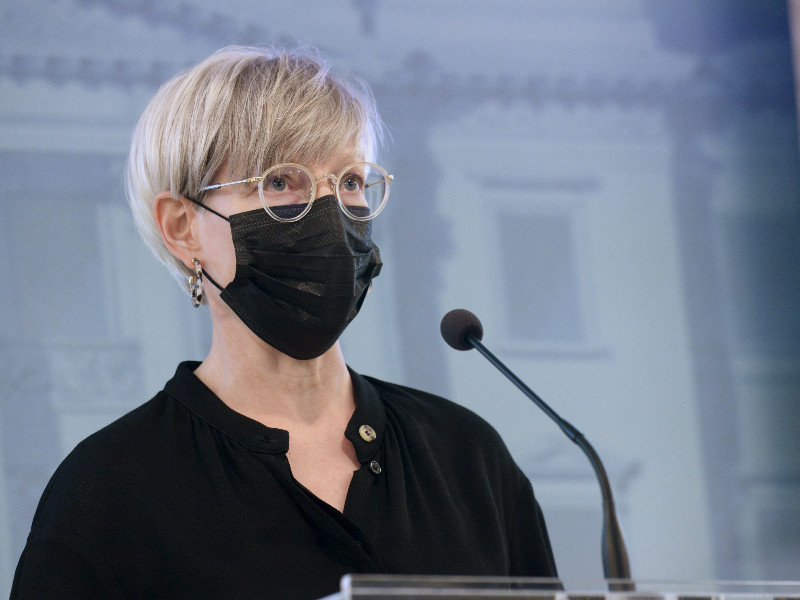 Kirsi Pimiä, the permanent state secretary at the Ministry of the Interior, commented on the easing of entry restrictions for business travellers in a news conference in Helsinki on Thursday, 17 June 2021. (Mikko Stig – Lehtikuva)

THE MINISTRY of the Interior on Thursday confirmed that the lifting of restrictions on business travellers arriving to Finland from the other parts of the EU and Schengen Area by land or sea as of Monday, 21 June.

Finland will also scrap entry restrictions for leisure travellers from the same group of countries who have been fully vaccinated against the coronavirus or recovered from the coronavirus disease in the past six months.

As the country presently allows business travel by land or sea only for employees performing tasks linked to functioning of society, security of supply or other critical tasks the decision will significantly ease business travel from countries such as Estonia and Sweden.

It was welcomed with delight and presumably relief especially in Estonia.

“Thanks to this decision, a situation that has lasted for almost five months is coming to an end,” Estonian Prime Minister Kaja Kallas wrote in an e-mail to Helsingin Sanomat. “During this time, work travel between Finland and Estonia was allowed only for a very limited group of employees, which affected the mobility of thousands and the lives of their families.”

Finnish Minister of the Interior Maria Ohisalo (Greens) voiced her satisfaction with the decision and its impact on the tourism industry on Twitter.

Tuomas Laosmaa, the head of border inspections at the Finnish Border Guard, told Helsingin Sanomat that negotiations have been held with shipping companies about initially limiting the number of passengers in the face of a rise in business travel due to concerns about possible congestions at ports.

“We’ve now agreed with shipping companies […] that they won’t put all the tickets for sale so that we can avoid difficulties,” he said.

The restrictions on passenger numbers are not incorporated in the decision made by the government, but they were negotiated separately, clarified Laosmaa.

“It’s my understanding that they’ll start with half and start increasing [the passenger numbers] then. Once we see that things are working, we’ll be ready to increase the capacity at a short notice,” he commented.

The Finnish government, however, will refrain from lifting internal border controls in accordance with its exit strategy, by the end of June. The controls will remain in place until 11 July, having been introduced in March 2020.

Kirsi Pimiä, the permanent secretary at the Ministry of the Interior, said yesterday the scrapping of internal border controls has been delayed due to the legislative work on measures to beef up health security at border-crossing points.

“Before the legislation has come out of the parliament and been implement, it’s rather difficult to guarantee sufficient health security measures at borders as passenger numbers are presumably rising,” she explained.

The bill may be presented to the government as soon as today, a spokesperson at the Ministry of Social Affairs and Health told STT on Thursday.

The controls will, however, be lifted on grounds of improvement in the epidemiological situation for travellers from Hungary and Poland in the EU and Monaco, Romania and San Marino outside the EU.

Passengers entering Finland after receiving only the first vaccine injection or testing negative for the coronavirus before departure will be asked to take another test within three days of arrival and stay in voluntary quarantine until the results have been received.

“The EU’s digital vaccination certificate will clear up the situation. We’re starting in a bit front-loaded way and until [the digital certificate is in use] we’ll be accepting national certificates,” he stated.

People not using the database can acquire another certificate from health care officials should they need one to travel, for example.