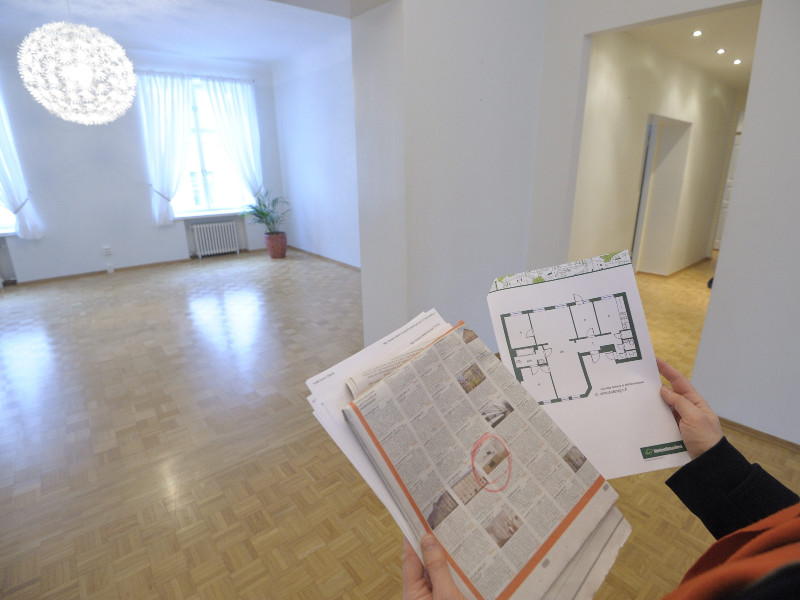 A prospective buyer examining documents in an empty flat in Helsinki in December 2012. (Markku Ulander – Lehtikuva)

THE PROPOSAL to cap total household debt to a percentage of annual gross income could have an impact on house prices especially in the capital region and other population centres in Finland, reports Helsingin Sanomat.

“It could decrease demand especially in the capital region, Tampere and Turku, which could have an effect on prices,” said Juhana Brotherus, the chief economist at the Mortgage Society of Finland (Hypo).

Brotherus pointed out to the newspaper that the impact on prices could ultimately be fairly limited, as institutional investors and high-income house buyers could make up for the decline in demand brought about by the ceiling. The ceiling could also curb housing production in the peripheries of cities, thus limiting its impact on house prices.

“It wouldn’t be a good change as it’d slow down urbanisation and prevent people from living in locations where they want,” he said, pointing to the impact on housing production.

His assessment was echoed by Timo Metsola, the managing director of Vuokraturva.

“Whatever the solution will be, people will be living near downtown areas. It’s more a question of the proportion of people living in rental houses and people living on owner-occupied houses,” he told Helsingin Sanomat.

Marja Nykänen, a Deputy Governor of the Bank of Finland, admitted that the ceiling could have an impact on house prices by limiting the loans granted to prospective buyers.

“The larger the loans, the more you can pay for a house,” she summarised. “If there was a backstop of some kind on over-indebtedness, it’d promote more stable price development. The debt ceiling could indirectly have a positive impact on the price development of houses.”

STT in June reported that the government is mulling over proposing that total household debt be capped at 500 per cent of annual gross income in order to rein in household debt. The proposal would grant banks and credit institutions the possibility to deviate from the limit with up to 15 per cent of new loans.

Both Brotherus and Metsola questioned the merits of the proposed maximum debt-to-income ratio.

“The increase in defaults of payment and growing indebtedness can’t be blamed on ordinary housing loans, through which indebtedness is responsible and steady,” Brotherus argued to Helsingin Sanomat.

While the ceiling would unlikely have an effect on housing loans in areas with low house prices, it could limit the options of prospective buyers especially in the capital region, but also in Tampere and Turku.

“It sounds like a strange goal to prevent low-income people from buying houses in areas where the housing market is the safest and most stable,” said Brotherus.

Metsola floated the possibility of introducing a different ceiling to different parts of Finland. The ceiling, he envisioned, could be 600 per cent of gross annual income in the capital region and 450 per cent in other parts of the country.

“If you also gave banks the opportunity to make exceptions, then we’d be close to having all the building blocks,” he gauged.

The Bank of Finland has expressed its support for a limit on household debt, viewing that it would enable households to better prepare for economic downturns and financial difficulties caused by temporary or permanent lay-offs.

“The proposal would make it possible to grant loans in roughly the same way as today,” analysed Nykänen. “It’s not in our interests to restrict housing-market activity. The goal and purpose of the debt ceiling is to prevent excessive growth in household indebtedness and over-indebtedness.”

The Bank of Finland, she revealed, has calculated that a ceiling equivalent to 500 per cent of annual income would not have a significant impact on mortgage lending, as creditors are already required to ascertain the repayment capacity of the applicant with a stress test using a 25-year loan and an interest rate of six per cent.

“The trend is that household indebtedness is growing, loan repayment periods are lengthening and the housing loans of new residential buildings are rising. The tools must be put in place before the problems become too big and the debt ceiling doesn’t have a significant impact on lending,” stressed Nykänen.

Calculations by the Bank of Finland and Financial Supervisory Authority (Fiva) reveal that last year more than a quarter (28%) of the amount of housing loans was granted to households with a debt-to-income ratio of over 450 per cent after the loan. The new loan pushed the ratio to over 500 per cent for 21 per cent of mortgage borrowers.

No political decision on the debt ceiling has yet been made. Prime Minister Sanna Marin (SDP) and Minister of Finance Annika Saarikko (Centre) both voiced their scepticism about the instrument in a municipal election debate organised last week by Helsingin Sanomat.