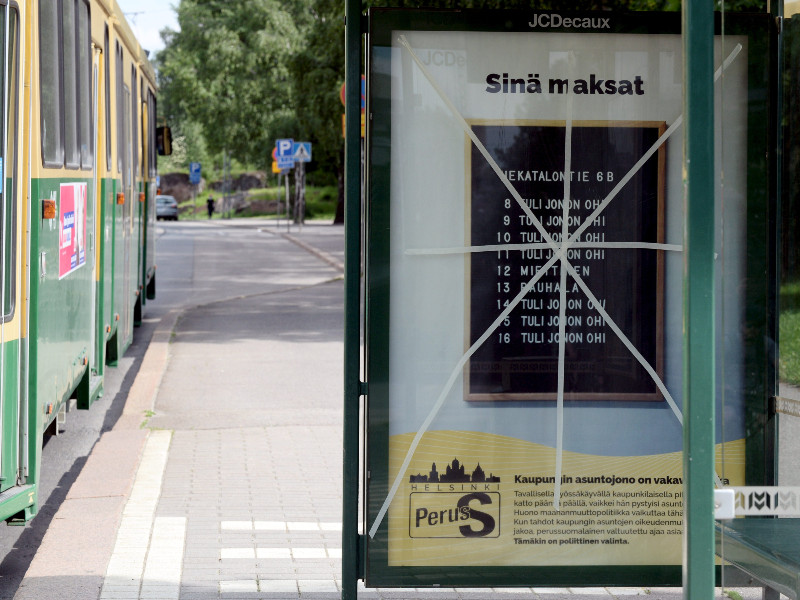 One of the Finns Party’s controversial campaign ads at a tram stop in Helsinki on 7 June 2021. (Mikko Stig – Lehtikuva)

THE FINNS PARTY has submitted a criminal complaint over the removal of its controversial campaign ads in Helsinki, reports YLE.

The ads, found at least on several bus and tram stops, had drawn considerable criticism for apparently suggesting that people of immigrant backgrounds receive preferential treatment in the distribution of city-owned rental houses.

The Finns Party has asked Helsinki Police Department to determine whether Ville Lehmuskoski, the chief executive of Helsinki City Transport (HKL), was guilty of discrimination or abuse of public office for removing the ads. HKL and JCDeaux, the advertising company selling the ad space, made the decision to pull at least some of the “misleading” ads on Monday.

The populist right-wing party believes the removal constituted the exercise public power and limitation of political freedom of speech.

“The City of Helsinki has pressured the company selling the ad space to remove the Finns Party’s campaign ads from paid space. This constitutes aggravated interference in the elections and freedom of speech,” Simo Grönroos, the party secretary of the Finns Party, stated to YLE on Wednesday.

Lehmuskoski said he had yet to examine the criminal complaint, adding that he will therefore not comment on the matter in a personal capacity.

HKL, he underlined to the public broadcaster, respects freedom of speech, freedom of elections and other key principles of democracy. It is also, however, bound by international rules on marketing that prescribe that marketing must be sincere, truthful and comply with both laws and good practice.

“The ad in question gave the impression that immigration policy was a reason for the unequal distribution of city-owned houses. The content of the ad had provoked condemnation, and it’s our understanding that it can be ruled to violate regulations in the marketing industry,” said Lehmuskoski.

Mari Randell, the housing programme manager at the City of Helsinki told YLE earlier that the origin of a rental house applicant is not a criterion at any stage of the application process. Also Helsinki City Housing Company (Heka) viewed that the campaign ads are inappropriate and incorrect.

“I disapprove of the claim that the ad had false information,” countered Grönroos. “It’s clear that when applying for houses asylum seekers without a house, for example, take precedence over many Finns.”

Grönroos said the party wants the city to acknowledge its mistake and restore the ads as soon as possible.

“It’s an impossible situation that the city or a single official decides what kind of themes parties can campaign with in elections. There’s only a few days to go until the elections, so we’ll use all means at our disposal to right the wrong,” he told YLE.