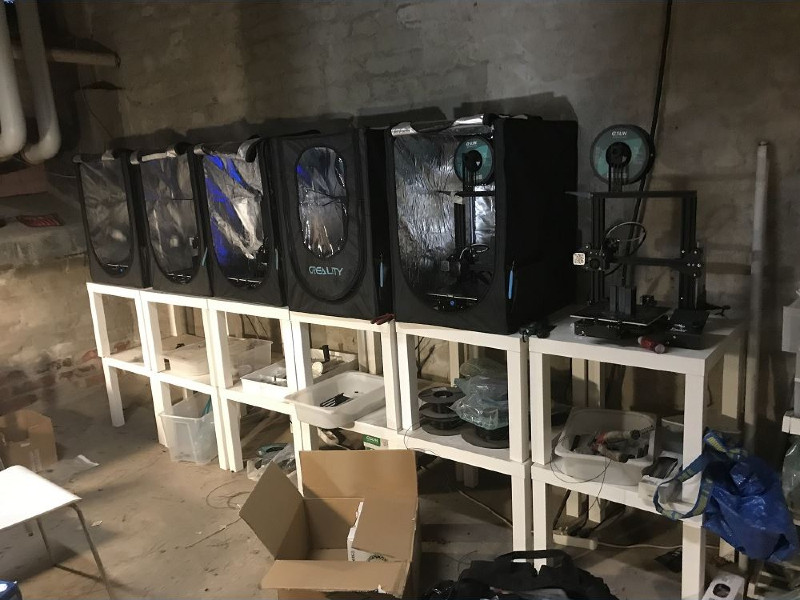 3D printers were used to churn out firearm parts in a warehouse near the centre of Tampere, Southern Finland. (Handout / Finnish Customs)

LAW ENFORCEMENT OFFICIALS in Finland have made almost 100 arrests and seized more than 500 kilos of narcotics, hundreds of thousands in cash and dozens of firearms as part of a global crackdown on organised crime.

Reports on Tuesday revealed that the FBI has for years covertly monitored clandestine communication between criminals on Anom, an app that was supposed to be impenetrably encrypted and thus enable the conspiracy of crime away from the prying eyes of law enforcement officials.

The FBI had developed the app to fill the vacuum left by the de-encryption and subsequent abandonment of communication platforms such as EncroChat and SkyECC. The app grew to serve over 12,000 encrypted devices used by criminal syndicates in over 100 countries.

“The FBI has given Finnish authorities information based on which it has been possible to steer proactive criminal investigation and open several pre-trial investigations. In Finland, the operations were conducted in close collaboration between police departments, the National Bureau of Investigation and Finnish Customs,” said Kimmo Sainio of KRP.

“The pre-trial investigations are linked to the prevention or organised crime and, especially, drug offences.”

KRP reported that even though many of the investigations launched on grounds of the shared intelligence remain ongoing, the intelligence has already enabled the, for example, a seizure of 145 kilos of marijuana and automatic firearms by police officers in the capital region. The pre-trial investigation was recently completed and the case forwarded to a prosecutor for consideration of charges.

Another example of a successful intervention was the raid of a warehouse churning out 3D-printed firearms parts near the centre of Tampere.

“The number [of firearm parts and equipment] is extremely high in the context of Finland,” Hannu Sinkkonen, an enforcement director at Finnish Customs, commented on the results of the raid to YLE on Wednesday. “This is all in all a very rare case both in Finland and Europe.”

The FBI intercepted and processed altogether 27 million messages exchanged by the roughly 12,000 users of Anom between October 2019 and June 2021. It proactively shared intelligence with the partner countries whenever the intelligence was ruled to be linked to a particular country based on the language or the country of residence of the users.

The crackdown carried out at the beginning of the week was led by the FBI, the US Drug Enforcement Administration (DEA) and the Dutch and Swedish police. Also participating were 13 other countries, including Finland, and Europol.

Jean-Philippe Lecouffe, the deputy executive director at Europol, on Tuesday revealed that the operation resulted in over 700 house searches and 800 arrests across the 16 countries.

Police in Sweden used the information gleaned from the messages exchanged on the platform has been used to prevent more than 10 murders since last autumn, according to Linda Staaf, head of intelligence at the Swedish Police Authority.

Calvin Shivers, the assistant director of criminal investigations at the FBI, said officials were able to identify over 100 threats made against the life or health of others in the 18 months leading up to the crackdown.