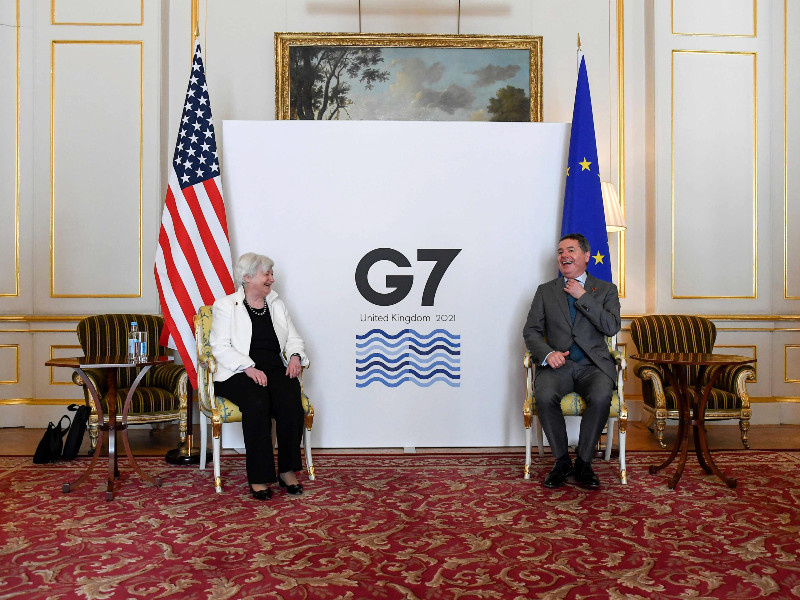 US Treasury Secretary Janet Yellen and Paschal Donohoe, the president of the Eurogroup, met on the second day of the G7 finance ministers’ meeting in London, the United Kingdom, on Saturday, 5 June 2021. (Alberto Pezzalli – AFP/Lehtikuva)

NEWS AGENCIES on Saturday reported that the finance ministers of the G7, a group of seven advanced economies, have struck an agreement on setting a global minimum rate of 15 per cent for corporate tax

Struck in London by Canada, France, Germany, Italy, Japan, the United Kingdom and the United States, the agreement represents an attempt to reverse a years-long downward trend in the taxes paid and tackle the tax avoidance tactics of multi-national corporations.

The move is projected especially affect multi-national technology behemoths such as Amazon and Google.

“The G7 finance ministers have made a significant, unprecedented commitment today that provides tremendous momentum toward achieving a robust global minimum tax at a rate of at least 15 per cent,” US Treasury Secretary Janet Yellen said in a public statement.

“That global minimum tax would end the race-to-the-bottom in corporate taxation and ensure fairness for the middle class and working people in the US and around the world.”

The agreement will next be discussed at a meeting of the G20 finance ministers in July, according to G7.

The calculations were made in response to a proposal to revamp global income taxation by the Organisation for Economic Co-operation and Development (OECD).