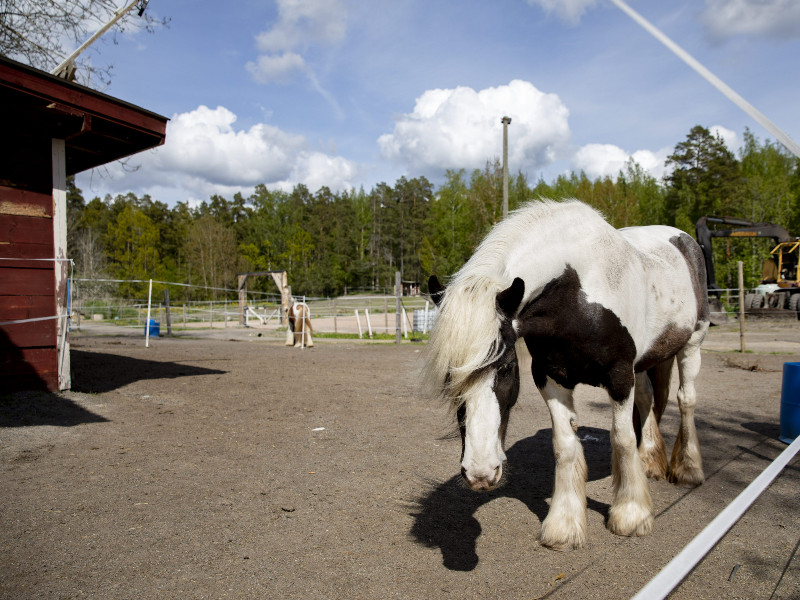 A horse in a pen at SR Talli in Naantali, Southwest Finland. (Roni Lehti – Lehtikuva)

TWO PEOPLE have been arrested in connection with a case revolving around SR Talli, an equestrian stables in Naantali, Southwest Finland.

Southwest Finland Police Department on Wednesday reported that the case entails “clear indications” of offences such as serious sex crimes, adding that the number of possible victims stands currently at roughly a dozen but could grow judging by the number of contacts.

Turun Sanomat wrote about the stables one day earlier, revealing that its investigation suggest that at least dozes of 12–20-year-old girls have been subjected to sexual harassment and even forced labour.

Police have received multiple criminal complaints about the stables and its operators, a couple born in the 1970s. The couple had been actively involved also in the operations of the owner of the premises, Turku Animal Welfare Society (TESY).

Southwest Finland Police Department said it has uncovered information supporting the claims made in the report and arrested the couple in conjunction with a search conducted on the premises on Tuesday. The investigators are currently of the view that the acts and wrongdoings took place over several years, but the possible victims had not stepped forward previously because of fears and threats.

No further details were provided on grounds that the pre-trial investigation remains in its infancy.

TESY on Tuesday announced it has terminated its co-operation with the stables, which had been used as a shelter for animals taken into custody by animal welfare authorities. The couple had also been in charge of the animal rescue vehicle of the society and the man a member of the management committee.

“Criminal complaints have been filed about the stables. A person involved in the stables’ operations today stepped down from the committee,” TESY stated on Facebook.

Britt-Marie Juup, the chief operating officer of TESY, added that the decision to terminate the co-operation was made quickly but after careful consideration.

“These reports of suspected wrongdoings took us completely by surprise. We heard about the suspicions first on Monday, 17 May. It is good that the police is investigating the matter. It concerns extremely serious accusations,” she said.

Helsingin Sanomat highlighted that TESY appears to have changed its stance on the matter significantly this week, as it declared earlier this week that the report by Turun Sanomat consists mostly of lies.

Southwest Finland Police Department has encouraged all possible victims to come forward regardless of when the offence took place. The department can be contacted by, for example, e-mail at This email address is being protected from spambots. You need JavaScript enabled to view it..