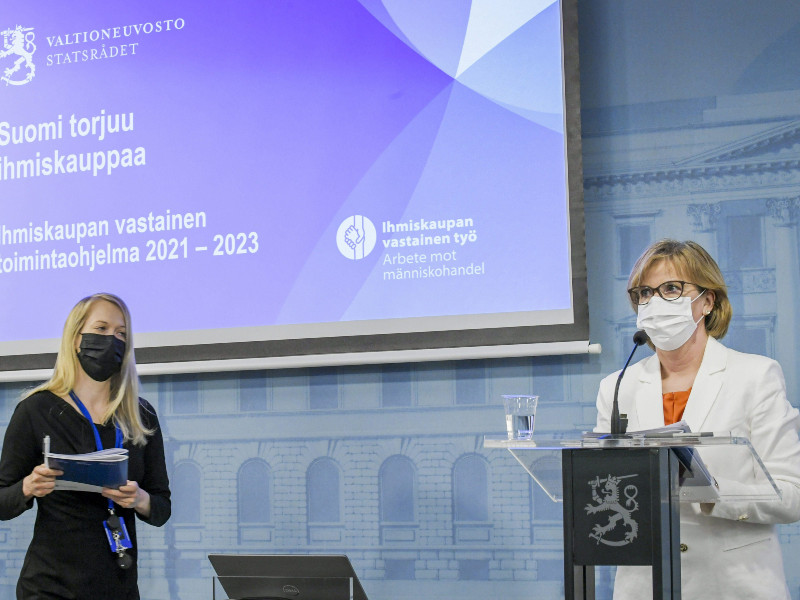 Minister of Justice Anna-Maja Henriksson (right) and Venla Roth, the anti-trafficking coordinator at the Ministry of Justice, shed light on a new 55-measure action plan to reduce and prevent human trafficking in Finland on 7 May 2021. (Markku Ulander – Lehtikuva)

THE GOVERNMENT of Prime Minister Sanna Marin (SDP) has unveiled an action plan with dozens of measures to weed out human trafficking in Finland.

The 55-measure action plan was devised partly in response to the numerous reprimands the country has received over the years from international human rights watchdogs for its insufficient actions against human trafficking.

“I’m confident that the measures laid down in the action plan enable us to respond also to the recommendations and reprimands we’ve received,” Minister of Justice Anna-Maja Henriksson (SFP) said on Friday.

The Ministry of Justice views that the entire criminal procedure must be developed to detect human trafficking better and to ensure all key stakeholders – from police and prosecutors to criminal sanctions experts – recognise the basic characteristics of human trafficking, know how to address it and are able to refer the victims to assistance programmes.

One failure of the existing protocols is that human trafficking is seldom detected through a complaint filed by the victims.

“The goal is that victims will think it’s a safe realistic option for them to seek official assistance, apply for a residence permit and file a criminal complaint about the exploitation they’ve experienced,” outlined Henriksson.

“We must also invest in the expertise of authorities who may not have been too involved with the work against human trafficking,” told Venla Roth, the anti-trafficking coordinator at the Ministry of Justice.

Pia Marttila, a special advisor at Victim Support Finland (Riku), told Helsingin Sanomat that the action plan is a step in the right direction, despite some shortcomings. While she voiced her delight at the concrete measures that should be realistically implementable by the end of he electoral term, she added that the action plan should have also included measures regarding victim compensation.

“What has specifically been a problem is that even if a court orders compensation, the victim may not necessarily ever get the money,” she said.

This is possible, for example, in circumstances where tax crimes have been detected during an investigation into labour trafficking, as the tax administration is able to enforce its claim against the defendant before the ruling, leaving no assets for compensating the victim even though the assets were initially seized specifically to secure the compensation.