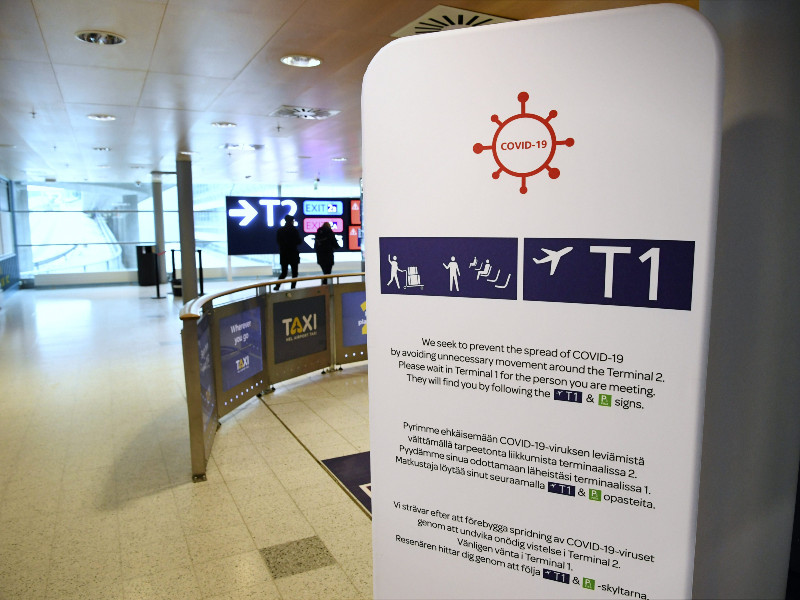 THE GOVERNMENT of Prime Minister Sanna Marin (SDP) will convene later this week to continue weighing up the possibility of making a certificate of a recent negative coronavirus test a condition for entering Finland, reports Helsingin Sanomat.

The issue has been on the table of lawmakers since last autumn, but thus far the attempts to draft the requisite regulation have failed – to the exasperation of industry and the opposition.

Mayor of Helsinki Jan Vapaavuori (NCP), in voicing his frustration with the lack of progress, highlighted that negative test certificates have been adopted as an entry condition in other parts of Europe. Sweden, for example, requires that people entering the country present a certificate of a negative coronavirus test taken no later than 48 hours before departure.

The Finnish Institute for Health and Welfare (THL) estimated last autumn that obliging passengers to take a coronavirus test prior to arrival would lower the risk of transmission by 10–20 per cent.

The need for certificate-based entry rules is urgent in light of the looming re-opening of borders in the summer, with the government’s exit strategy indicating that people should be able to travel relatively freely as soon as August or September.

Helsingin Sanomat on Saturday wrote that Finland is likely to revert to a system where the criteria for arrival differ for passengers depending on the epidemiological situation in their country of departure. Officials at the Ministry of Social Affairs and Health are also exploring the possibility of facilitating business travel initially by stipulating that business travellers could only arrive through Helsinki Airport.

The system must clear a number of legal and practical obstacles, however.

Lawmakers must first ensure they have credible health and judicial reasons for limiting the free movement of people within the Schengen Area. The credibility of the entry system will also hinge on the approach taken to making sure arriving passengers are in possession of the necessary certificate.

While the most straightforward approach would be to oblige passengers to present the certificate at the point of departure, the Finnish legislation cannot impose responsibilities on the officials of other countries.

The Finnish Border Guard has voiced its support for obliging airlines and other transport companies not strictly to require certificates from passengers upon boarding, but to cover the cost of the return journey for passengers who made the journey without the certificate, according to Helsingin Sanomat. Such a system has been put in place in certain other parts of Europe.

Another solution is to increase the incentive of passengers to obtain the certificate in advance by, for example, stipulating that anyone entering without one would be ordered to return to their country of departure. The solution, however, raises the question of how widespread checks are feasible at entry points and who would cover the cost of the possible removal, testing or quarantine.

Some legal experts have stated that the possible problems have been overblown by the Ministry of Social Affairs and Health.

While the preparatory work is relatively far along, the officials have yet to decide which approach is sufficiently efficient from the viewpoint of border controls and health security, as well as likely to pass the scrutiny of the Parliament’s Constitutional Law Committee, wrote Helsingin Sanomat.

The Constitutional Law Committee is tasked with monitoring the constitutional compliance of laws already during drafting, making it a unique body of judicial review in Europe.