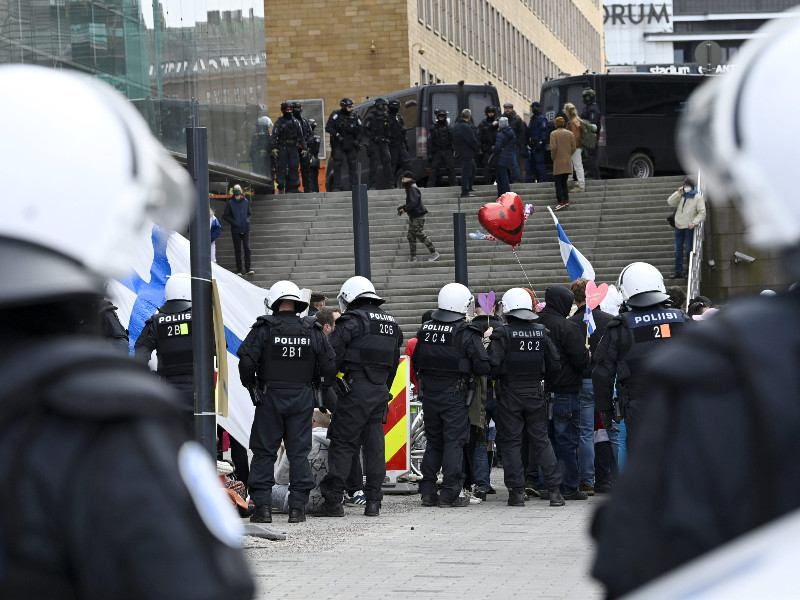 Police officers in crowd-control gear monitored a demonstration held in Helsinki on 1 May 2021. (Emmi Korhonen – Lehtikuva)

POLICE RACISM has become a topic of nationwide discussion following the release of two reports about questionable police actions and procedures by YLE.

Officers at Helsinki Police Department, the public broadcasting company reported, engaged in systematic activity with characteristics of ethnic profiling by keeping track of the movements of Roma in Helsinki in 2013–2017.

The officers kept track of the movements, vehicles and acquaintances of members of the minority group in an informal log introduced in response to internal guidelines issued in 2013 advising them to intervene in all wrongdoings and other observations made while on patrol at a low threshold.

Information obtained by the broadcasting company indicates, however, that the guidelines were interpreted in the field as a licence to stop and write down the details of people without legal grounds. The number of entries in the log stood at around 1,000 at the time of its dissolution in 2017.

An inquiry into the practice has recently been opened by the National Police Board.

Heikki Kopperoinen, a deputy chief of police at Helsinki Police Department, told YLE that the log was introduced as part of an effort to intervene in shootings that had taken place in the capital in 2013–2017, also causing danger to bystanders. The shootings, he added, were shown to be linked regrettably often to feuds between different Roma families.

“We had to intervene in the shootings somehow. We monitored the situation and tried to get it under control, so that no bystanders or even offenders would be hit with a bullet,” he commented.

Kopperoinen confirmed that the log consisted primarily of entries about Roma people and their vehicles but denied the interpretation that the practice constituted ethnic profiling against the minority group.

“I definitely don’t think this activity was ethnic profiling. Of course you can say right off the bat that the police department has made tremendous progress on these matters in recent years. There may have been a few missteps along the way, but we’ve made progressed and fixed a lot,” he underlined, pointing to training undergone by police officers about foreigners and equality.

“The purpose of this was to make sure these shootings are prevented and no one ends up losing their life or something.”

He added that the log was discussed internally and discontinued after he took over as deputy chief of police in 2017. Also the shootings had ended by then.

“We decided to discontinue this kind of activity, as someone could misinterpreted it,” he said. “The world has changed a lot in this time. We wouldn’t take this approach today. If we had to do the same thing over, maybe we’d use the information at our disposal now to think whether it’s smart and, on the other hand, how it’d look from the outside.”

YLE on Sunday wrote that police officers in various parts of the country have revealed they have seen their colleagues behave in an inappropriate or racist way on duty. The officers, who spoke to the public broadcaster on the condition of anonymity, said racist attitudes are evident especially in comments made during coffee breaks, but also when dealing with people of immigrant backgrounds on duty.

Some indicated that they understand where the prejudiced and racist attitudes of their colleagues come from: “In this line of work, you only meet people of certain ethnic backgrounds in negative contexts,” described one interviewee.

Mikko Eränen, an assistant police commissioner at the National Police Board, told the public broadcaster that the issue will be brought up in discussions with chiefs of police.

“We’ll make sure through management that no one in any police units uses these kinds of racist practices or comments. This will start from the management level,” he said. “Inappropriate behaviour and racist attitudes aren’t part of police values.”

The Office of the Prosecutor General issued rulings on nearly 30 cases in which police were accused of racist behaviour in 2018–2020, according to YLE. Many of the cases, it revealed, were linked to complaints about a police officer ordering a motorist to stop and checking their licence and registration for no apparent reason and behaving in an inappropriate or racist way.

Not one of the cases was deemed to warrant a pre-trial investigation.

Minister of the Interior Maria Ohisalo (Greens) on Sunday stressed that the police must have a zero tolerance for racism and discrimination.

“If there are situations where someone has acted in a way that’s not in line with this zero tolerance, you have to admit to it, acknowledge the actions and seek to rectify the actions across the board, so that every police or civilian employed with the police is aware of the basic principles. The law states that respect for basic and human rights is at the core of official activity,” she said to YLE.

It is important, she added, that problems are discussed in public.