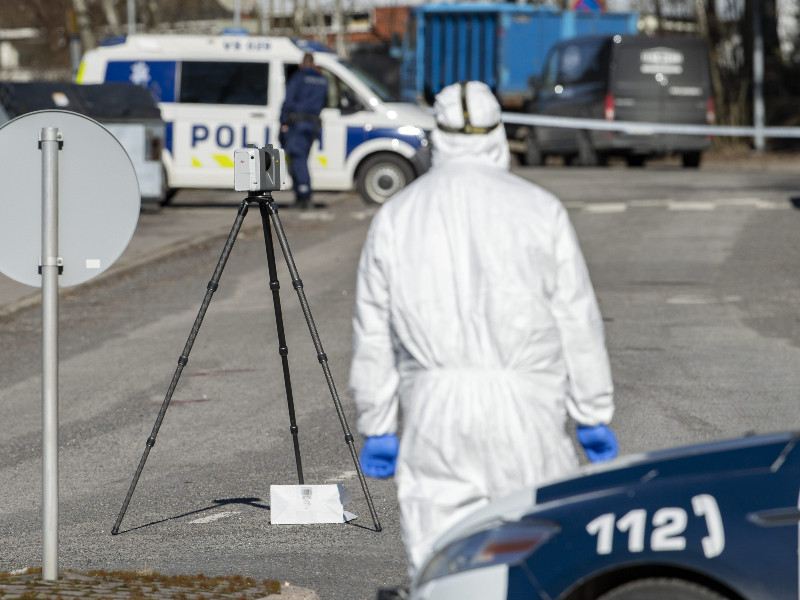 A forensic scientist at the scene of a suspected double murder in Perno, Turku, on 3 April 2021. (Roni Lehti – Lehtikuva)

OFFICERS at Southwestern Finland Police Department last week provided an update on their investigation into a double homicide that took place in Perno, a western neighbourhood of Turku, on 3 April.

Police on Thursday revealed that there appears to be no single motive for the homicides.

The 27-year-old suspect is believed to have been under the influence of narcotics as he drove to the neighbourhood to meet a 27-year-old man on the night of the homicide, roughly a day after the old friends had gotten into an argument over money that had escalated into a fight.

“We are talking about a small sum of money, more about the principle,” said Kontio.

“They happened in the wrong place at the wrong time,” told Kontio.

The suspect continued into a flat and shot dead the 27-year-old man he had injured earlier. Also a 23-year-old man and 49-year-old woman were in the flat at the time of the incident.

“Based on the pre-trial investigation, you can conclude that they could have ended up as homicide victims in the incident,” said Kontio.

The suspect was taken into police custody as he was leaving the residential building the same way he had entered it. He was detained on suspicion of two murders and three attempted murders by the District Court of Southwest Finland on 6 April. Charges against him, the court ruled, must be brought by 1 July.

He is also suspected of firearms and narcotics offences, as well as operating a vehicle under the influence of narcotics. He has no criminal record at least from the past decade in Finland.

“This is a large case, but we have been making progress on schedule,” said Kontio.