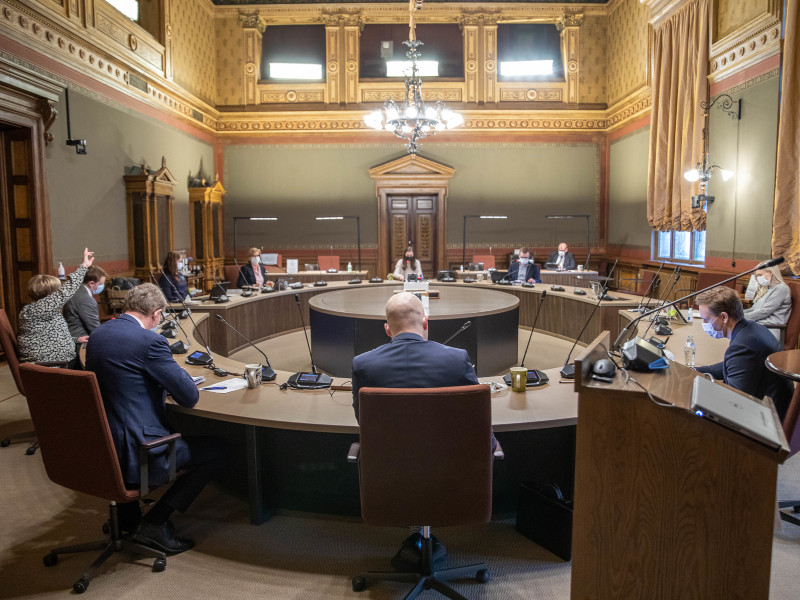 Members of the Finnish government discussed the financial framework for the next couple of years in the House of the Estates on Friday, 23 April 2021. (Handout / Office of the Prime Minister)

THE GOVERNMENT of Prime Minister Sanna Marin (SDP) ironed out the final details of its spending framework for the coming years on Thursday.

“These decisions are designed to support stronger growth, carbon-neutral society and reducing inequalities,” she summed up in a press conference yesterday evening, according to Helsingin Sanomat. “We have to succeed in making sure no one falls behind as society recovers from the coronavirus crisis.”

The ruling five-party coalition agreed in its severely protracted negotiations to exceed the previous spending framework by approximately 900 million euros in 2022 and 500 million euros in 2023. The temporary up-ticks were justified with necessary costs such as the reform costs stemming from the social and health care reform and increases in state subsidies for basic municipal services.

The government also agreed to slash previously planned expenses for 2023 by 370 million euros. Nearly one-third, or 110 million euros, of the spending cuts are to be introduced in the administrative domain of the Ministry of Transport and Communications.

A decision on the exact allocation of the spending cuts will be made next autumn, but cuts of roughly 35 million euros are expected also in the domains of the Ministry for Foreign Affairs, Ministry of Defence, Ministry of Justice, Ministry of Agriculture and Forestry. Marin stressed, however, that no cuts will be targeted at education, student and social welfare benefits or social and health care services.

As the spending cuts are permanent, they will reduce cost items counted toward the spending framework also beyond 2024.

“The decisions made in this session won’t increase the expenditures inherited by the next government,” highlighted Minister of Finance Matti Vanhanen (Centre).

Marin on Thursday told that the employment measures agreed on in the framework session should add 40,000–45,000 people to the ranks of the employed, nudging the government closer to its goal of raising the employment rate to 75 per cent.

The measures are estimated to have a positive impact of 560 million euros on the national economy.

Minister of the Interior Maria Ohisalo (Greens) said the government will seek to at least double education and employment-based immigration by 2030. It will also improve the labour market position of people with limited ability to work by establishing a special-purpose company to hire such people on longer-term basis and offering temporary agency workers to other employers, with the goal of some of the employees finding employment on the open labour market.

The government will devise a 70-million-euro support package and raise the upper limit for the tax-free use of peat in heat production until the end of the decade to offset the effects of soaring emission rights on the peat industry.

The tax on tobacco will be raised to replenish state coffers by a total of 100 million euros in 2022–2023, while the tax subsidy for paraffinic diesel fuel will be scrapped in 2021–2023 to boost tax revenues by over 85 million euros.

A decision on tax hikes worth 100–150 million euros will be made in the budget session scheduled for next autumn.