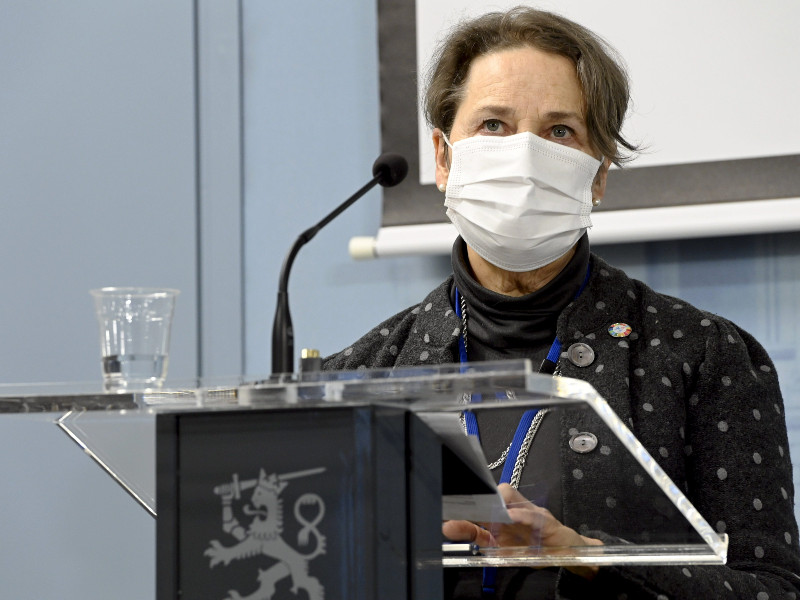 Sari Ekholm of the Ministry of Social Affairs and Health reacted at a press conference on the Covid-19 vaccine of AstraZeneca in Helsinki on Wednesday, 14 April 2021. (Heikki Saukkomaa – Lehtikuva)

THE FINNISH INSTITUTE for Health and Welfare (THL) is continuing to recommend that only over 65-year-olds be vaccinated against the coronavirus with the vaccine developed by AstraZeneca, writes YLE.

Mia Kontio, a leading expert at THL, stated yesterday in a press conference that the vaccine has caused three cases of extremely rare blood clots, including a fatal one, in Finland.

All three patients were under 60 years of age, according to Maija Kaukonen, a chief physician at the Finnish Medicines Agency (Fimea).

With Johnson & Johnson pointing to similar concerns in delaying the roll-out of its vaccine in Europe, it is probable that the situation has an impact on the pace of vaccinations in Finland, according to Kontio.

“It’ll definitely delay it, but by how much will depend on what happens next,” she said.

The original plan was to vaccinate all over 16-year-olds by late June or early July. The target may now have to be pushed back by as much as a month depending on the size and timetable of vaccine shipments, new findings about the harmful side effects and the possible introduction of new vaccines, estimated Kontio.

Finland is presently receiving shipments of the vaccines developed by Moderna and Pfizer-Biontech. Also a third messenger-RNA vaccine is expected to receive market authorisation in the near future.

Sari Ekholm, a chief physician at the Ministry of Social Affairs and Health, said the vaccines from the three suppliers should suffice for everyone but confirmed that the vaccination campaign may indeed be delayed due to the recent development.

“There are no concerns that we could run out of vaccines, but we’re also not expecting any large and quick shipments,” she said.