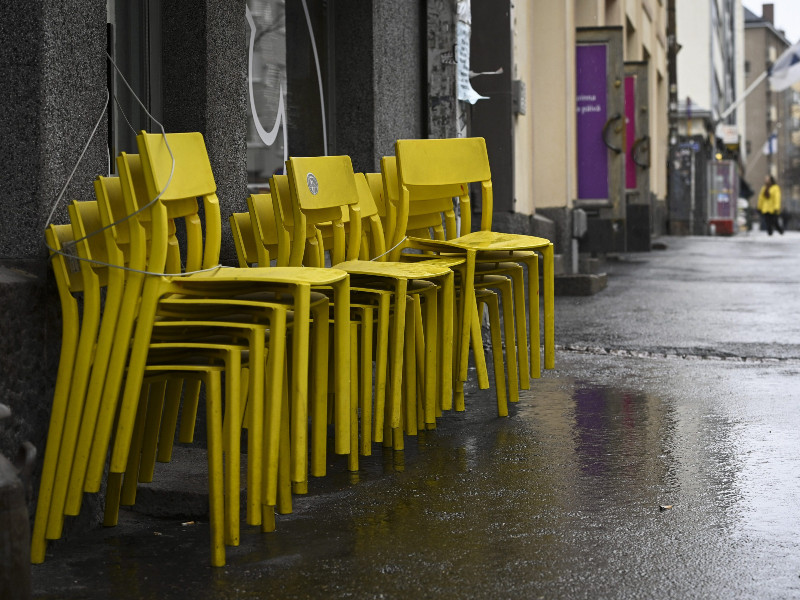 Piled-up chairs outside a restaurant on Vaasankatu in Helsinki on 9 April 2021. (Emmi Korhonen – Lehtikuva)

THE PARLIAMENT of Finland will today determine the conditions on which restaurants will be allowed to re-open after the six-week shutdown instituted in regions in the acceleration or community transmission phase of the coronavirus epidemic.

The shutdown is ending on Monday, 19 April.

YLE on Wednesday reported that it has obtained information indicating that restaurants would have to stop serving alcohol at 5pm and close their doors at 6–7pm in the worst affected regions.

Timo Lappi, the managing director of the Finnish Hospitality Association (Mara), stated to the public broadcasting company that he would be outraged if decision continue to impose such severe restrictions on the industry.

“These are very strict and very surprising decrees while the infection numbers have come down,” he said.

The end of the shutdown is nevertheless good news for cafés and lunch restaurants. Lappi on Wednesday estimated that such establishments will re-open their doors as soon as possible even though the legislation prescribes that employees must be given a notice of at least seven days before return to work.

“I think they can reach an agreement with employees and people will come to work sooner, even though judicially shift schedules should be published a week before the work starts,” he said.

Dinner restaurants, by contrast, are unlikely to resume operations if they are ordered to stop serving at 5pm.

“A large share of dinner restaurants will stay closed. You couldn’t even offer anyone reasonable working hours with these restrictions. Maybe Saturday brunches will work, but I doubt much else will,” said Lappi.

The Parliament’s Health and Social Affairs Committee last week kindled hopes of more lenient restrictions in the restaurant industry by stating that there should be a “very high” threshold for issuing a decree to close restaurants primarily serving food before 9pm.

He also highlighted that the industry could lose over half of its revenue if the restrictions are introduced as reported by YLE.

The restrictions would apply to areas in the acceleration and community transmission phase of the epidemic, such as Kymenlaakso, Uusimaa and South-west Finland. Mikko Virtanen, a divisional director at Kymen Seudun Osuuskauppa (KSO), said the easing of restrictions is a welcome piece of news.

“It sounds very good in light of the situation that we’ll be able to open restaurants for at least a moment and bring people back to work. This is welcome news all in all,” he said to YLE.

Some of KSO’s restaurants have sold takeaway food during the shutdown, but their sales have remained at less than one-fifth of usual levels, according to Virtanen. The co-operative is planning on opening at least some of its restaurants, as well as two pubs to determine if patrons are undeterred by the 6pm closing time, in Kymenlaakso on Monday.

“It remains to be seen if people will find their way here for so-called daytime refreshments,” he said.