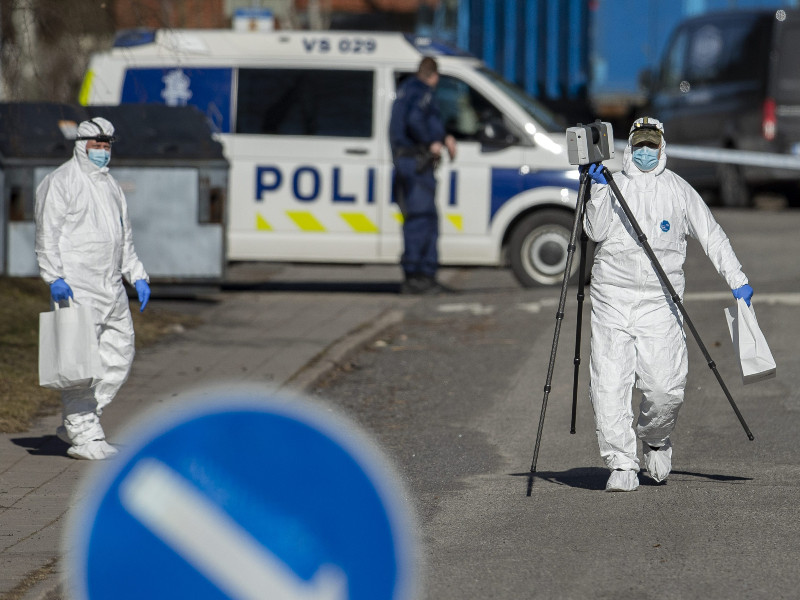 Forensic scientists examined the scene of a double murder in Perno, a western district of Turku, on Saturday, 3 April 2021. (Roni Lehti – Lehtikuva)

HOMICIDE INVESTIGATORS at South-west Finland Police Department have requested that a man born in 1993 be detained on suspicion of two murders and three attempted murders in connection with an incident that took place in Perno, a western district of Turku, on Saturday.

MTV and Helsingin Sanomat on Tuesday revealed that the suspect is registered as a resident of Kouvola, an over 80,000-resident city in south-east Finland.

He has no criminal record from the past 10 years in Finland.

Police discovered a 25-year-old woman and 27-year-old man dead from gunshot wounds and a 29-year-old man with serious stab wounds when responding to a shots fired call from a private residence shortly after 4am on Saturday, 3 April. Mika Paaer, the detective chief inspector in charge of the pre-trial inquiry at South-west Finland Police Department, revealed later that also two others – a 23-year-old man and 49-year-old woman – were found hiding from the offender in the residence.

The two had no physical injuries.

Paaer has revealed earlier that the offender was targeting the deceased man and, possibly, two people in his company. The offender was found close to the scene of the homicide in possession of a firearm and edged weapon, but he did not resist arrest.

The investigators have determined the motive of the homicide.

“Police have been able to figure out what was the reason for the act in interrogations. I don’t wish to disclose the motive at this point, though,” he commented to YLE on Saturday.

The man is also suspected of firearms and narcotics offences in connection with the incident.