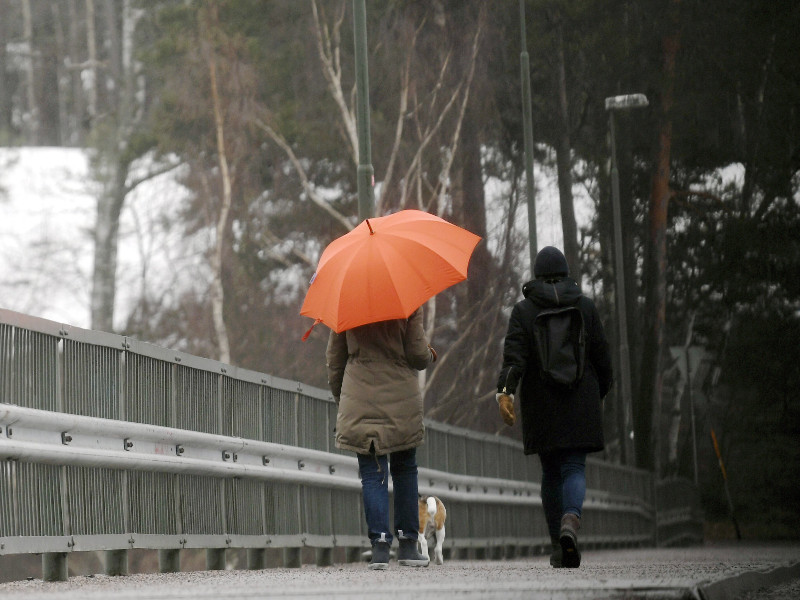 People walking a dog in the rain in Helsinki on 29 March 2021. (Vesa Moilanen – Lehtikuva)

The number of registrations represents an increase of eight per cent from the previous year, confirming that the coronavirus epidemic and the widespread restrictions it has imposed on social lives have prompted many to seek canine companionship.

Tuula Laitinen, the head of the breeding committee at the Finnish Kennel Club, stated to Helsingin Sanomat that the interest is showing no signs of abating as people continue to work from home in high numbers.

“The interest is still clearly visible. I’m sure a fairly high number of litters is being planned,” she said.

Getting a dog is a major decision that should be weighed up carefully. Emmi Hakio, a dog trainer and behaviour expert, revealed to the newspaper that the impromptu decisions to take in a dog over the last year have led to an increase in the number of customers seeking help for issues linked to their dogs.

“People may not have thought through the decision to get a dog or its breed. Or maybe they didn’t know how to provide the dog with enough things that it needs. Some people think it’ll learn to behave by itself,” she said.

Hakio pointed out that her professional title, dog trainer, is somewhat misleading as most of the training is done with the dog owners rather than the dogs themselves. “I train owners whose dogs have behavioural problems,” she summarised to Helsingin Sanomat.

She added that many of her customers are not indifferent but rather possibly ignorant of some of the factors that should be considered deciding to get a dog.

“It’s not an issue of indifference for many. It’s often about ignorance. Maybe they’ve searched for information and even read a lot, but they don’t know how to apply the information in practice,” she estimated.

Rekku Rescue, a Finnish animal welfare organisation providing housing for dogs and cats that have been abandoned or taken into custody, has registered a sharp increase in the number of people giving up their pets, according to Minna Monto. The organisation, she said, has been offered roughly 150 dogs in the past year, signalling an increase of 100 per cent from the previous year.

“People are starting to have one-year-old dogs that they want to get rid of,” she told Helsingin Sanomat. “It’s good that people look for help if they can’t keep the dog.”

Rekku Rescue was prepared for the rise in demand.

“We knew to expect it. People were consigned to their homes at the start of last year and started getting pets thinking they had to have a dog. Now the dogs probably have all sorts of behavioural problems because people didn’t know how they should be trained. Or maybe they realised a dog requires a lot of work and isn’t as nice as they thought.”

The rising demand has translated to long waiting periods for reputable breeders and prompted some buyers to turn to unofficial channels. Some owners, for example, have sold their dogs without telling the buyer about the problems they experienced, while so-called puppy mills have continued churning out puppies that may be unhealthy or unvaccinated.

“An owner may send a dog with problems forward. The problems often double with the new owner,” said Monto.

The waiting times may also have had a positive impact by prompting those not necessarily serious to scrap their plans.