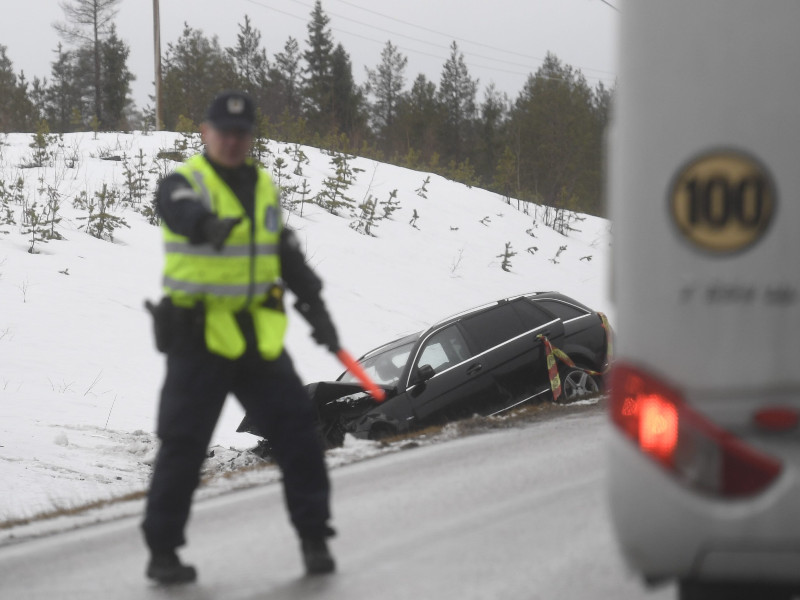 A police officer directed traffic at the site of an accident that left eight people injured in Suomussalmi, Eastern Finland, on Monday, 5 April 2021. (Vesa Moilanen – Lehtikuva)

EIGHT PEOPLE suffered injuries as two cars crashed into one another in Suomussalmi, Eastern Finland, on Monday.

The accident took place on highway 5 some 10 kilometres north of the 8,000-resident municipality shortly before 10am, as the driver of a south-bound car tried to overtake a long line of vehicles but failed to get back into their lane before crashing head-on into an approaching car.

Police have reported that the road was slushy and driving conditions were difficult at the time of the accident.

Helsingin Sanomat on Monday reported that the driver of the south-bound car is born in 1972 and that of the other car in 1993. Both cars had three passengers in addition to the driver, with their ages ranging from 15 to 50, according to Olli-Pekka Koukkari, the director of Kainuu Social and Health Care Joint Authority.

Two of the injured people were transported to Oulu University Hospital and six to Kainuu Central Hospital in Kajaani. Two of the patients were later moved from Kajaani to Kuopio.

He did not have information on the condition of people treated in Oulu. He had estimated earlier yesterday that their injuries may have been more serious than those of the people transported to Kajaani. The patients moved from Kajaani to Kuopio, meanwhile, had sustained fractures that, although not life-threatening, require time and special expertise to treat.

“None of them was able to walk,” he said. “I tend to think it meets the criteria for serious injury if a person isn’t able to walk on their own.”

He had earlier said the eight had sustained injuries typical to car accidents, such as thoracic trauma and open fractures.