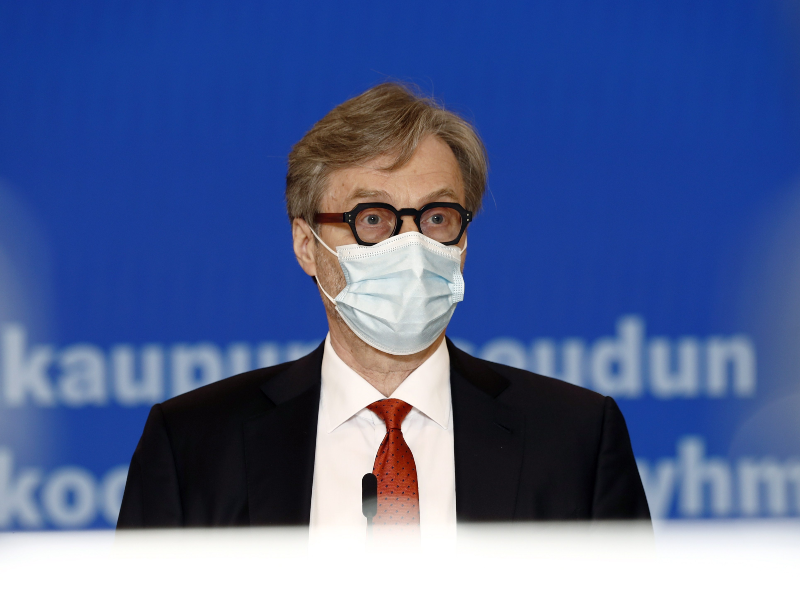 Markku Mäkijärvi, the chief medical officer at the Hospital District of Helsinki and Uusimaa (HUS), reacted at a press conference held in Helsinki on 30 March 2021. (Roni Rekomaa – Lehtikuva)

THE NUMBER of hospitalised coronavirus patients has decreased in the Hospital District of Helsinki and Uusimaa (HUS).

Markku Mäkijärvi, the chief medical officer at HUS, told YLE on Saturday that the drop in the number of patients requiring hospital or intensive care provides a glimmer of hope that the epidemiological situation is at least moving in the right direction.

“We’re delighted that there’s good news. The number of patients treated for coronavirus infections in hospitals has clearly started to decline,” he commented.

Mäkijärvi revealed that hospitals in the district had a total of 76 coronavirus patients, including 20 in critical care, yesterday morning. The public broadcasting company highlighted that the numbers signal drops of 80 and 10, respectively, from 31 March.

Also the number of coronavirus patients discharged from hospitals presently exceeds that of those admitted to hospitals. Patients have also been transferred to hospitals in other hospital districts as a precautionary measure in anticipation of a surge in demand for hospital capacity over Easter, wrote YLE.

“We’re glad to be wrong about that,” said Mäkijärvi. “Every coronavirus ward has room to bring in more patients. And now there’s room for other patients, too, and there seems to be no shortage of them.”

The Finnish Institute for Health and Welfare (THL) on Saturday revealed that 302 new coronavirus infections have been reported in Finland. Mäkijärvi, however, reminded that one should not read too much into the numbers, as people have not been getting tested in as high numbers as usual due to the holidays.

“It’s naturally possible that the epidemic is losing momentum, but the change shouldn’t be this drastic. Testing behaviour is a bigger contributing factor here.”

“The test numbers will definitely increase once people return from their holidays. It won’t be until we know how many infections there’ll be that we know the current pace of the epidemic,” he added, encouraging everyone to get tested at a low threshold after returning from holidays. “If we don’t have detailed information about the spread of the epidemic, we’d be moving forward in fog and our decisions wouldn’t be as correct as they’d otherwise be.”

Also Mika Salminen, the director of health security at THL, drew attention to the reluctance of people to get tested during holidays but admitted that the downward trend in infections is clear at least in the capital region.

“And we’re definitely seeing that we’re on the decline when it comes to mortality. That’s because vaccines have reached a relatively large share of the most elderly people,” he said.

“There’s a slight concern linked to the belated increase in case numbers in the south after the winter holidays. It didn’t seem to be associated exclusively with travel. We’ll have to hope people have exercised caution and spent Easter [by] meeting their loved ones but avoiding big parties,” he added.

Salminen declined to offer a definitive answer when asked about how how much the number of infections should decrease before the restrictions could be lifted.

“From a big-picture perspective, the lower we get the better,” he responded. “If we managed to get to the same numbers, as well as the trend that was pointing down, we had last May, that’d be a good target.”

In May 2020, the number of new daily infections varied between fewer than 20 and more than 160. The numbers, though, are not directly comparable to the present situation due to the lack of testing capacity at the time, reminded Salminen.

They do nevertheless provide a reasonable basis for comparison, he added, meaning it would not be enough to achieve a 50 per cent reduction from the peak levels. “We’d have to get lower,” confirmed Salminen.